by Michelle Konstantinovsky Oct 2, 2017
Protesters enlist a giant barrel of beer in their demonstration against Prohibition. Henry Guttmann/Stringer/Getty Images

With artisanal cocktails and mile-long wine menus at just about every restaurant and bar from coast to coast, it's hard to imagine an alcohol-free era in America. But for 13 years, The National Prohibition Act, otherwise known as The Volstead Act, put the kibosh on recreational drinking and banned the manufacture, transportation and sale of "intoxicating liquors" in the United States.

And while bootleggers and speakeasy operators found ways to sneakily sell booze despite the law, one unlikely group legally provided easy access to alcohol: doctors.

You may not think of your friendly neighborhood medical office as the most likely makeshift liquor store, but for a time in America, physicians were able to escape the law and make a few bucks on the side. "Doctors had long prescribed alcohol as medicine, but it became a thriving business during Prohibition," says Karen Blumenthal, author of "Bootleg: Murder, Moonshine, and the Lawless Years of Prohibition." While alcohol had been widely used through history to treat an array of medical conditions, it eventually fell out of favor with doctors, and by 1917, the American Medical Association (AMA) voted to support the prohibition of alcohol across the country.

But by 1922 — just two years after the Volstead Act went into effect — a national AMA survey called "Referendum on the Use of Alcohol in the Medical Profession" revealed some interesting developments: Suddenly American doctors believed alcohol was a useful treatment for 27 separate medical conditions including everything from diabetes and cancer to snake bites and lactation problems.

A woman smiles as she tucks a flask into her boot during Prohibition. From this picture, you can see how the term "bootlegging" arose.
Universal History Archive/UIG via Getty images

"Medicinal alcohol was a popular loophole in the Volstead Act, the Prohibition enforcement law," says Garrett Peck, author of "The Prohibition Hangover: Alcohol in America from Demon Rum to Cult Cabernet." "Before Prohibition, doctors widely recognized that alcohol is not medicine, but during Prohibition, the AMA changed its opinion, in part because patients still wanted to drink."

Even though the very same group that wanted to bring booze back had previously declared it had "no scientific value," the U.S. Treasury Department authorized doctors to write prescriptions for alcohol. "Doctors were given prescription forms to prescribe 'medicinal whiskey' at pharmacies," Peck says. "This was widely abused, as the forms were often copied, and much more whiskey was released from bond than the federal government ever intended."

In fact, historians have suspicions about one famous pharmacist, Charles Walgreen, whose Walgreens chain expanded from 20 stores to 525 during the 1920s. Many credited the founder's introduction of the milkshake for the chain's success, but as Charles Walgreen Jr. later told an interviewer, while his father worried about the danger of fires in his stores, he "wanted the fire department to get in as fast as possible and get out as fast as possible because whenever they came in, we'd always lose a case of liquor from the back."

"The prescription exemption was eagerly sought by the same physicians who, in the walk-up to the 18th Amendment, had officially — through the AMA — argued that there was no real medical use for liquor," says Daniel Okrent, author of "Last Call: The Rise and Fall of Prohibition." "What they realized, as the Volstead Act was being drafted, was the opportunity to take advantage of it."

Doctors and pharmacists weren't the only ones able to circumvent the law; farmers were allowed to produce wine for their own consumption, and religious leaders including priests and rabbis were allowed to serve it during services and ceremonies. But physicians were the ones who stood to make a profit. "Any doctor could give a patient a prescription of a pint of whiskey (or other alcohol) every 10 days," Okrent says. "In most cities, $3 was the going price for the prescription, and a similar amount was paid to the pharmacist who filled it."

According to Peck, others found ways to get crafty during Prohibition, too. "George Remus, the man who inspired "The Great Gatsby," figured out that medicinal whiskey was a great business model," he says. "He bought up a bunch of distilleries, which had rickhouses full of whiskey that couldn't be sold, then bought up pharmacies to distribute the whiskey. He then bribed federal officials to allow a lot more whiskey to seep out of his rickhouses. Remus made a fortune in a short period of time."

And although some opportunistic alcohol pushers did in fact get reprimanded for crossing legal lines, the end of the 13-year ban put an end to most boozy corruption. "One of the last people in Wyoming charged with violating the Prohibition law was a medical doctor from the town of Kemmerer," says University of Wyoming history professor Phil Roberts. "Oddly, he was charged the very day before Wyoming's 'constitutional convention' met to vote on repeal of the 18th Amendment. Later, the charges against the doctor were dismissed."

Now That's Interesting
The National Archives notes that New York City by itself boasted between 30,000 and 100,000 speakeasies in 1925.

Prehistoric Frog Had a Monstrous Bite

Panda Populations Are Growing, But Their Habitat Remains at Risk 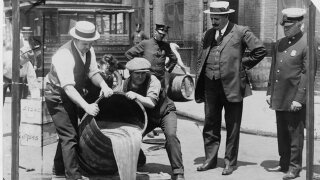 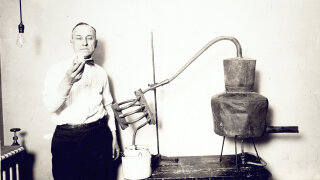 Stuff You Missed in History Class: How Prohibition Works