What Was the Very First Toothbrush?

Browse the article What Was the Very First Toothbrush? 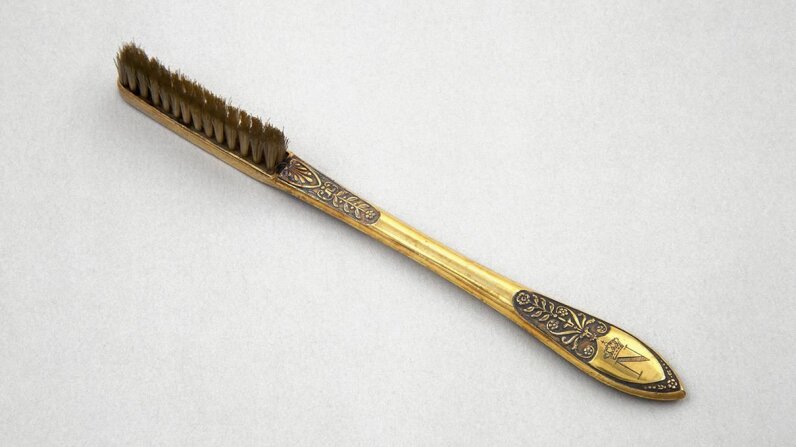 Thats not the very first toothbrush, although it was made for one Napoleon Bonaparte (note the initial N inscribed on the bottom) around 1795. SSPL/Getty Images

When asked to name the one invention that would be impossible to live without, Americans did not pick their phone. They didn't pick their car. They didn't even pick that one pair of cute little boots that goes with everything. (Actually, the boots weren't among the five choices offered to participants in the annual Lemelson-MIT survey.)

They picked their toothbrush.

Hold up though. That survey was from 2003. So we conducted an informal survey of HowStuffWorks staffers (n = 23) to find out if the toothbrush would still take the lead 14 years later. It did. The toothbrush got 11 votes, followed by the cell phone (5), computer (3), microwave (2) and car (2).

You probably aren't scoffing. The humble toothbrush is a staple for a lot of modern cultures, and it comes by its popularity honestly: Versions of the toothbrush have been around since ancient Babylonian times. But note that these were not the sterile plastic creations we take out of the box.

"The first tooth cleaning implement seems to have been the 'toothpick' or more correctly small bones or slivers of bones," writes Scott Swank, dentist and curator of the National Museum of Dentistry, in an email.

He points out that people used even less technical means, too. "Fingers wrapped in cloth have been used for ages to clean teeth," he says. "Hippocrates recommended using a round woolen ball dipped in honey to clean one's teeth." But not all recipes for early toothpaste were so sweet.

"Both the Greeks and Romans had recipes for dentifrice containing all manner of ingredients from ground pumice to urine," says Swank. (Urea, contained in urine, is actually a fairly effective teeth cleaner and whitener, for those looking to go real old-school and all-natural.)

But enough of pee-toothpastes. We're here for the almighty toothbrush, and Swank says that the first real evidence of that comes from Babylon, around 2500-1800 B.C.E. The frayed end of a stick or plant was used to scour the teeth.

If you're trapped on a desert island, don't hesitate to try out the old tools. "Used properly and with a suitable stick those 'toothsticks' can be quite effective," says Swank. "Some even contained a small amount of sanguinaria, which may have some antibacterial properties and can be found even today in the formulation of some toothpastes. The key is a fibrous, non-brittle stick."

We have to look much closer to our own times to find a brush we might recognize. "The first device that we would consider the precursor to the modern toothbrush is recorded in China circa 1500," says Swank. "These were straight bamboo handles pierced with trimmed hog bristles set at a right angle to the brush." The handle was replaced after the invention of plastic, but it wasn't until the invention of nylon in 1938 that the boar bristles (or horse hairs) were swapped out, according to the folks at Colgate.

But toothbrushes had caught on popularly before that, thanks in part to William Addis. In 1780, the English merchant was thrown in jail for starting a riot. After finding a bone on the ground and begging some hog's bristles from a jailer, Addis fashioned a modern "toothbrush" and began mass-producing them in England.

Sounds too good to be true? "I have no reason to doubt the story as a whole," Swank says. "It could have become a bit embellished over time but I think, on the whole, it stands up."

So between gargling with urine and scrubbing with hog's bristles, your morning routine might have looked quite different back in the day. But the next time you spit into the sink, thank the bored inmate who made the whole thing popular.

NOW THAT'S COOL
Miswaks (or siwaks) — those fibrous sticks with frayed ends that early toothbrushes were based on — are still used in some cultures. They've also gained a following among people who say the more natural brush is a traditional and healthy alternative to modern brushes.