by Julia Layton
Prev NEXT
10 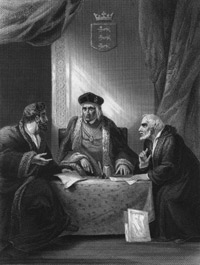 Henry VIII established his reputation as a people's king by executing Richard Empson (L) and Edmund Dudley (R), who had been on his father's (C) council.
Hulton Archive/Getty Images

Henry VIII's father, Henry VII, wasn't a very popular king. The primary goal of his government was to amass riches in order to solidify the ultimate power of the monarchy. In achieving this end, his financial council essentially stole money from subjects under the pretext of various taxes and fees. Two of the most powerful men on this council were Edmund Dudley and Sir Richard Empson. These two men became symbols of the financial looting that infused the rule of Henry VII.

The people of England despised these men who were held responsible for Henry VII's policies. Immediately upon the death of Henry VII and succession of Henry VIII, the new king made a move to secure his popularity and his image as a king of the people. He found shaky evidence that Dudley and Empson had been embezzling money, his court found them guilty and Henry had them beheaded. They died in public executions in 1510.

While Henry VIII began his reign as a popular monarch, he wasn't without his powerful political enemies. The next two men on the list died because they were of royal lineage and could assert reasonable claims to Henry's throne.