by Julia Layton
Prev NEXT
5 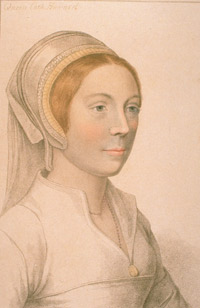 Henry VIII married Catherine Howard after he annulled his fourth marriage to Anne of Cleves. Henry never liked Anne of Cleves -- it was a politically motivated marriage arranged by Thomas Cromwell, and she was apparently homely. Cromwell paid for his poor judgment with his career. Henry married Catherine about two weeks after Anne was out of the picture. The Howards were a powerful family in Henry's court, with influence and high standing. Catherine seemed a good fit, and it took two years for Catherine's sordid past to catch up with her.

As things so often happened at court, it started with a rumor. This one, though, was true. It seemed Catherine Howard had had lovers before Henry. The king didn't know this when he married her, and he was humiliated when the truth came out. To make matters worse, the queen had appointed one of her pre-marital lovers to be her secretary. Rumor had it the affair continued after her marriage to the king.

The adultery aspect of the charge was never proven, but it didn't matter. Upon learning that he had married a nonvirgin, Henry had Parliament pass an act declaring it treasonous for an unchaste woman to marry the king. Catherine Howard was promptly beheaded for treason.

Henry also had Catherine's uncle beheaded, but for entirely different reasons. Henry Howard was the victim of courtly lies, the result of a power struggle between two of the court's most powerful families, the Howards and the Seymours.