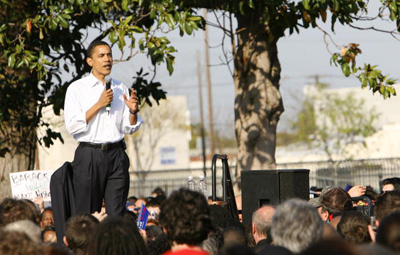 Throughout­ the first half deca­de of the 21st century, the Republican Party controlled Congress and the White House. The voting public perceived that Congress was making little progress in addressing issues, however. When the 2006 Congressional elections rolled around, the Democrats won both the House and Senate back. To the Democrats, it was a clear mandate: "The American people have spoken clearly and decisively in favor of Democrats leading this country in a new direction," said Senate Democratic leader Harry Reid [source: Los Angeles Times].

As the next two years wore on, however, the Democratic-led Congress faced similar disapproval. "Congress is not getting its work done," criticized President George W. Bush in November 2007, saying the House and Senate had both "wasted valuable time".

If there's one clear message Barack Obama wants to get across to the voters, it's that he represents change. He's been called "the first viable black presidential candidate" . He is the son of a black Kenyan and a white Kansan who divorced. He was raised outside of any organized religion, schooled in Indonesia and admitted to using drugs as a young man. He beat Al Franken and George Carlin, among others, receiving the 2006 GRAMMY® Award for "Best Spoken Word Album" for the audio version of his book, "Dreams from My Father".

Obama has zeroed in on Americans' fatigue with Congress in recent years, but he asserts that America is not divided between Republicans and Democrats, but rather by old political rivalries. He says he's the candidate who can unite the U.S. government. "It's time for a new generation of leadership, because old politics just won't do," he told a crowd at the University of Denver on Jan. 30, 2008.

This message attracted support in many quarters among American political groups, the public and the media. Obama ranks extremely high among liberal groups, extremely low among conservative groups. He is favored by labor and considered unfriendly by business. Health care, economic revival and an end to the war in Iraq are among his stated highest concerns. He is for nuclear disarmament, diplomacy with Iran and falls on the pro-choice side of the abortion debate.

So how did Obama get to this stage of his political career? Read on to find out about his life before presidential politics.