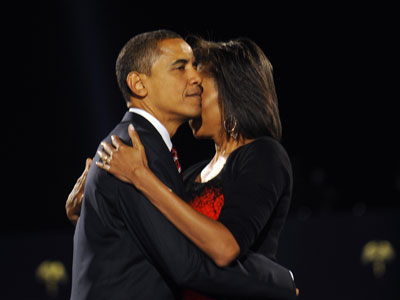 The few days preceding the U.S. presidential election on Nov. 4 were exhausting for Obama. A record number of voters had taken part in early voting in the 32 states that allowed it. Despite these millions of ballots already cast, Florida, Virginia and Ohio remained key battleground states, and Obama visited each several times over the week leading up to Election Day. Outside of the race, Obama suffered the loss of his grandmother, who'd helped raise him, the day before the election.

His campaign found itself flush with cash after the record-breaking $650 million he raised during his combined primary and presidential bids ($150 of which was raised in September 2008 alone); 91 percent of those funds coming from individual donors [source: Telegraph, Open Secrets].

As a result of the unspent cash, the Obama campaign purchased half-hour blocks of programming time on three of the four major U.S. television networks. He held last-minute and late-night rallies, drawing crowds between 45,000 and 100,000 people in the West and Midwest and featuring guest appearances by celebrities like Bruce Springsteen. He also purchased advertising and held rallies in traditionally Republican states like Missouri and New Mexico, as well as in his opponent Sen. John McCain's home state of Arizona.

His 20-month campaign for the White House over, Obama returned to Chicago to cast his ballot and spend election night with his family and more than 125,000 supporters at an Election Night rally in his honor in Chicago's Grant Park.

The first election results in the nation predicted the outcome for the rest of the country. The 21 voters in Dixville Notch, N.H. -- which allows ballots cast at midnight on Nov. 4 -- went to Obama, 15 to 6. As the day wore on and polls began to close, the results for the rest of the United States came in.

The popular vote for the nation was divided, with Obama capturing an estimated 62.2 million votes, 52 percent of the vote [source: CNN]. But the electoral vote count showed that Obama won in a landslide. Ultimately, Obama won an estimated 338 electoral votes, 68 more than the 270 required to become president. In addition to maintaining all states that had voted Democrat in 2004, the candidate managed to flip at least seven 2004 red states to newly blue ones, including the battleground states of Florida, Ohio and Virginia -- a state that hadn't voted Democrat since 1964 [source: CNN, Fox News].

On Nov. 4, 2008, after serving just four years as an elected official in the federal government, Sen. Barack Obama became the first black president-elect in the history of the United States. "If there is anyone out there who still doubts that America is a place where all things are possible," Obama said during his victory speech, "…tonight is your answer" [source: USA Today].