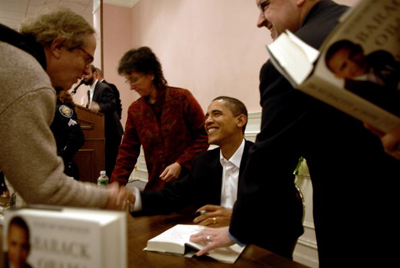 Obama signs copies of his second book, "The Audacity of Hope" -- which includes his positions and plans on issues facing the U.S. -- in New Hampshire in 2006.
Jodi Hilton/Getty Images

Obama says he intends to "make government cool again". Like some other candidates, including Republican challenger Mike Huckabee in 2008 and Bill Clinton in 1992, he's made his case for being cool on late-night talk shows. Obama's turn came when he delivered the Top Ten list on "Late Night with David Letterman" on Jan. 24, 2008. Obama offered his facetious "Top Ten Campaign Promises" to Late Night viewers -- No. 9: "I will double your tax money at the craps table" [source: CBS].

Most likely this is not Obama's actual plan to revive the United States economy. His official site states that his plan for economic reform will come in the form of tax relief, support for education and technological innovation, and tax breaks for small businesses.

In addition, Obama's economic platform includes rolling back tax cuts for the wealthiest Americans. Middle- and lower-class citizens would get extra tax credits for mortgages, higher education and dependents. Seniors in these classes making less than $50,000 per year could also look forward to a complete elimination of their income taxes. He also plans to issue more tax rebate checks like the ones sent out to American taxpayers by the Bush administration in 2008 [source: Barack Obama.com].

Obama expects to foster business and employment by promoting American businesses overseas and trade agreements that lower prices without cutting American companies out of competition, as well as a reduction in the self-employment tax for small business owners, among other ideas.

Like many other Democratic candidates, Obama has focused on health care as a major pillar for his platform. The New York Times reports that he plans on requiring all children to have health care insurance by repealing tax breaks for American households with incomes more than $250,000. He also plans on introducing legislation that makes employers pay all or some health care costs for workers.

The economy replaced American involvement in the Middle East as the major topic of concern, although war remained a major issue. As president, Obama would recall troops from Iraq shortly after taking office, yet, he says "I will finish the fight against Al Qaeda" [source: Barack Obama.com]. He's stated he would begin drawing down troops immediately once elected [source: The Washington Post]. He also supports a surge in troops in Afghanistan, where the Taliban made a resurgence during the 2008 campaign [source: McClatchy].

Obama agrees with Roe v. Wade, telling voters in New Hampton, Iowa, on Oct. 6, 2007, "A lot of people have arrived in the view that I've arrived at, which is there is a moral implication to these issues but that the women involved are in the best position to make that determination" [source: Courier-Post]. He also believes the decision whether to use the death penalty should be left up to the states.

As for environmental issues, Obama's in favor of ratifying an international agreement over environmental regulations. He's also come out against drilling in the Arctic National Wildlife Refuge and in favor of federal mandates requiring increases in fuel efficiency. He voted for the Fuel Economy Reform Act of 2006. "Certainly, when you look at our energy policy and environment and the prospects of climate change, we've gotta make some decisions right now," he said in a CBS interview in February 2007. One decision Obama's in favor of is establishing a national cap and trade carbon exchange to reduce emissions and to increase fuel economy standards by 4 percent per year [source: The Washington Post].

Early in the race for the Democratic nomination, questions of whether America is ready for a black president began to arise, but Obama believes he can unite people of all races and creeds. "Unity is the great need of the hour," Obama quoted Dr. Martin Luther King during a service in honor of King in Atlanta on Jan. 20, 2008 [source: Barack Obama.com]. Obama aims to unite Republicans and Democrats and has become fond of evoking the name of popular Republican president Ronald Reagan.

While the issue of race was generally kept remarkably far from discussion during the primaries, Obama made civil rights issues a major part of his platform. The candidate says as president, he'll end employment compensation disparities among minorities by passing the Fair Pay Act. He has also stated he will make more use of drug courts for nonviolent offenders, expand hate crime laws and reduce sentencing disparities among minorities [source: Barack Obama.com].

With regard to foreign relations, Obama says he would seek talks with Iran and Syria [source: NPR]. His official site includes a foreign policy plan that targets a two-state accord between Israel and Palestine as a "key diplomatic priority." If elected, the candidate also plans to reach out to Asia, work toward "a nuclear free world," expand the military and insulate the CIA from politics [source: Barack Obama.com].

In modern American politics, it takes vast sums of money to run a successful campaign for president. Read about how Barack Obama raises money on the next page.