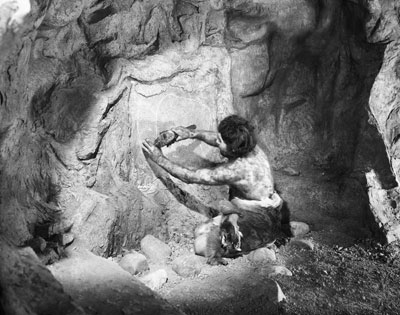 Image Gallery: Caves Who knew they had cameras back then? See more pictures of caves.
Petrified Collection/The Image Bank/Getty Images

The stereotypical caveman is a brutish, hulking figure, physically strong but with a feeble intellect. Hairy and heavy-browed, communicating through crude gestures and grunts, cave dwellers are typically seen in movies and TV shows where anthropological accuracy isn't a primary goal.

Who were the real cave dwellers? Cavemen (along with cavewomen and cave children) did exist, although perhaps not in the Hollywood mold. Early humans and humanlike species used caves for shelter, and the little we know about them comes from what they left behind in those very dwellings.

Scientists have long debated the role caves played in the development of early humans. We'll never know the full story, but we can piece together a picture of prehistoric cave life through archaeological sites like Lascaux. Within that famous cave in France is a collection of astonishing cave paintings that hint at a symbolic, possibly religious life for those primitive humans.

But cave dwellings weren't limited to early humanlike species -- some caves have been occupied for thousands of years, even into modern times. Some people even choose to live in cave homes today, because they're efficient, sturdy and environmentally friendly.

What would it be like to live inside a cave? Why someone would choose to inhabit one, and what have archaeologists have found preserved inside them? We're going to explore the pros and cons of cave life and visit the most famous cave dwellings in the world.

Caves definitely protected cave dwellers from nasty weather, and probably from a lot of dangerous animals as well. Many animals simply refuse to enter caves, although cave bears would certainly have been a problem. But what about protection from other cave dwellers? It turns out it wasn't much of an issue. During the Paleolithic Era, systematic violence was extremely rare. There were conflicts between groups, but cooperation was the norm. Well-hidden caves were probably beneficial, but they didn't need to be forts.