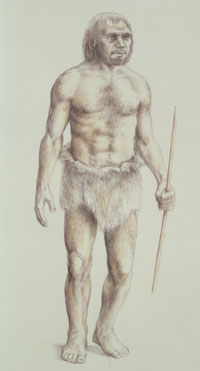 We know that cavepeople existed -- early humans and other species closely related to humans inhabited caves. The question is, how important were cave dwellings to these primitive peoples? We'll probably never really know, because they left no historical records other than a few cave paintings and scattered artifacts. However, the general consensus among anthropologists and archaeologists is that caves very rarely served as permanent settlements. They may have provided seasonal shelter or been temporary camp sites for nomadic groups that moved from place to place, following the herd animals they hunted for food.

Some of the prehuman or humanlike species that may have lived in caves include Homo antecessor, Homo neanderthalensis (Neanderthals), Homo erectus and Homo heidelbergensis. Early humans, Homo sapiens, also used caves sporadically. Living as hunter-gatherers, these species didn't create permanent settlements. They had several ways of building shelters for themselves, such as stretching animal hides over bone, building rough wooden lean-tos or creating earthen mounds. When they came across a cave suitable for shelter, they used it.

The most common caves in the world are made of limestone, which is eroded by acidic water. Although there are millions of caves, many of them are unsuitable for shelter. The entrances may be located on an inaccessible cliff face, or the entrance itself may be a long vertical shaft. Surrounding terrain often blocks the view of the entrance to casual observers, which is why many previously inhabited caves remained hidden until modern humans rediscovered them. And it's not just the outside that's intimidating -- cave interiors are rarely safe places. They're filled with crevices, unstable gravel slopes, multiple entrances and exits, shafts and potential rockfalls. Once you move more than a few dozen meters from the entrance, they're also utterly dark. And without naturally occurring ventilation shafts, the air could quickly become unbreathable. A cave suitable for living in is actually quite rare.

The Neanderthals are one particular species known to have had a predilection for cave living. They existed throughout a wide swath of Europe during a glacial period. The harsh climate forced Neanderthals to be adaptive, creative survivors. Archaeologists believe they used two main strategies: circulating mobility and radiating mobility. With circulating mobility, each group of Neanderthals had several temporary camps, some of which included caves, spread throughout a region. They moved from place to place in search of the best hunting grounds. With radiating mobility, the group had one central camp. Hunting parties headed out from camp, moving farther and farther afield to find food. In at least several cases, these main camps were caves [source: Tattersall]. The caves suited the Neanderthals' purposes especially well because they lived in very small groups of about a dozen individuals. Few caves could support a larger population. There is evidence that in at least one case, Neanderthals and early humans lived in the same cave at the same time and shared resources [source: Viegas].

In the next section, we'll examine the archaeological evidence of prehistoric cave life -- in particular, cave paintings.

The era that most people think of when they talk about "cavemen" is the Paleolithic Era, sometimes referred to as the Stone Age (it's actually one part of the Stone Age). It extends from more than 2 million years into the past until sometime between 40,000 and 10,000 years ago (depending on who you ask). Ironically, there are probably more humans permanently living in caves today that at any time in human history.