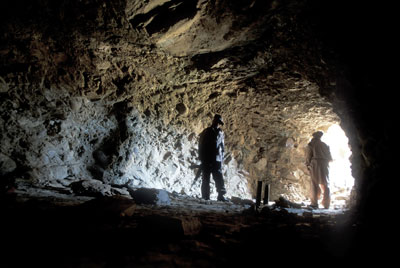 In Afghanistan, Taliban insurgents have made frequent use of caves as places to live and hide from U.S. troops. This cave in the Tora Bora Mountain is Bin Laden's last known house.
Reza/Getty Images

Some people choose to live in a cave today because it's tradition, while for others, it's an economic necessity. There are people who build their own cave homes for environmental reasons. Most modern cave homes were intentionally carved out of the rock -- not many people live in natural caves.

In the Mount Hebron region of the West Bank, in the Middle East, a large clan of Palestinians lives in a network of caves that their grandparents built 100 years ago. The area has been claimed by Israeli settlers, and the Israeli army has threatened to remove them from the caves [source: AFP]. While the settlement has had aboveground buildings added to it, it was originally built because the people there didn't have the resources to build houses.

In southern Spain, there's a long tradition of cave dwellings. Here, the caves were dug out of hard clay and earth. Near Granada, a network of ancient caves are sometimes inhabited by homeless people. Many purpose-built caves have been renovated to include modern security, air conditioning and electricity as well as running water. It's something of a trend for Europeans to own a refurbished cave house, either as a vacation home or a permanent residence.

Cappadocia is a region in Turkey known for an elaborate system of cave dwellings. The landscape there is harsh and rocky with little plant life -- it's often referred to as lunar. The natural caves in the area provided adequate shelter in the absence of other building materials, while the rock was frequently carved into man-made caves. In the early years of the Christian religion, anchorites, people who withdrew from society for religious reasons, chose to live here in order to pray and meditate without the distractions of the world. The caves became even more important in the 7th and 8th centuries, when Arabs persecuted Christians in the region. Cappadocian Christianity literally went underground, building elaborate subterranean churches with arches that mimicked aboveground architecture. These churches eventually grew into an entire underground city. These were eventually abandoned, then rediscovered by locals who used the rooms for storage.

A contractor with subterranean building experience can build homes into the sides of hills, dig down into the ground, or convert a previously existing underground installation, such as an abandoned missile silo. You can even build an "underground" home aboveground, by piling earth around the sides and even on the roof of a house, a practice used for centuries in parts of Europe.

Moisture issues are the main problem with cave houses. Proper drainage and ventilation can help, but an underground home isn't a good idea in an area prone to flooding. Another drawback is light. Living without natural light from windows can be very depressing, and it can even have physiological effects. Cave builders work around this obstacle by using clever light shafts. The insides of the shafts are coated with highly reflective materials, allowing maximum light to travel through them. Even rooms that are far from the surface can receive some natural light.

There are several benefits to building underground. The home has a low environmental impact because few construction materials are needed (although care must be taken not to damage the environment when digging out the cave). Cave homes are remarkably energy-efficient. Most underground chambers maintain a temperature in the 50s (Fahrenheit) regardless of the outdoor, aboveground weather. This means only minimal heating is required in the winter, and they stay pleasantly cool in the summer. An underground home also takes up a small amount of space on the surface, leaving you space to plant gardens, attract wildlife or just have a bigger yard. Plus, it's very difficult to break into an underground home -- there are no windows to break through, just one main door and some ventilation shafts.

The Horrific Tale of Sawney Bean

Alexander "Sawney" Bean was reportedly a cave-living cannibal who lived in Scotland sometime in the 18th century. He didn't commit his murderous feeding spree alone, either -- his wife and 45 children and grandchildren (most of them the products of incest) inhabited an isolated cave for 25 years. They attacked solitary travelers, killed them and ate them. The depravity was ended when the King of Scotland sent a band of armed men to the cave to root out the Beans, who were all executed [source: BBC].

This fantastic tale is almost certainly a myth, as only a handful of reports exist in local publications. No official records have been found that confirm such a family ever existed, and the horrifying nature of the case (not to mention the direct involvement of the king) would surely have left more concrete evidence.