The Office of the First Lady 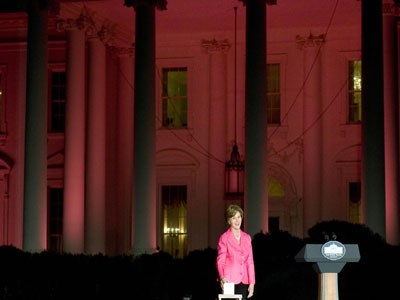 The American public has no say in the first lady's assumption of her position. The office is extraconstitutional: The U.S. Constitution doesn't outline any parameters for the first lady's role, duties or power [source: Watson]. It can only be attained through marriage (or in the cases of bachelor or widowed presidents or those whose wives are unable to fill the position, a special invitation to serve as White House hostess). For the last 200 years, first ladies have been interpreting the office according to their personalities, the state of the union and the tone of the administration.

While there is freedom in how the first lady elects to fulfill her office, there are also many historic precedents that she is expected to follow. Perhaps the most imperative function she serves is White House hostess. The early first ladies, like Martha Washington, Abigail Adams and Dolley Madison, set a careful tone for this role. Given the United States' separation from England's monarchical traditions, it was important that the first lady be a woman of the people -- but for the sake of being taken seriously by other nations, she had to imbue the role with some queenly prestige [source: National First Ladies Library].

Being the White House hostess meant -- and means -- more than throwing parties at 1600 Pennsylvania Ave. As Washington style expert Sally Quinn explains, "People […] think that that entertaining in Washington politically and diplomatically is frivolous, but it is not. It is part of the work" [source: Wallace]. The first lady is also the nation's symbolic hostess. Today, the public may take cues from Hollywood, but in years past, the first lady was the ultimate icon of style, values and social graces.

The first lady is an international celebrity, and she can leverage her title to serve as an advocate for social issues. That's why the first lady traditionally has a platform (or pet project, as some historians call it) for her term in office. Whether it's animal rights (Florence Harding), environmental beautification (Claudia "Lady Bird" Johnson) or literacy (Barbara Bush), the first lady's influential advocacy of her chosen cause will typically continue even after her term in Washington ends.

In the latter half of the 20th century, the first lady espoused more political roles, acting as a campaigner for her husband and drawing up support for his policies. In many instances, she acts as the president's informal adviser. That raises the question: How much power does the first lady have? Next, we'll take a look at how she exerts her influence in Washington and beyond.

In 1776, three years before Abigail Adams became first lady, she made a request to her husband, John, who was helping draft the U.S. Constitution. "Remember the ladies," she wrote to him, "and be more generous and favourable to them than your ancestors" [source: The Massachusetts Judicial Branch]. Her progressive ideas would inspire many first ladies, especially the suffragists in the late 19th and early 20th centuries.