The First Lady's Sphere of Influence: Budget, Staff and Activities 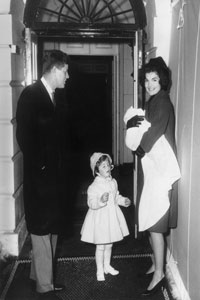 Even though the first lady of the United States (FLOTUS) isn't a salaried position, she is given a budget to carry out her work. (Her husband, by contrast, makes $400,000 -- an amount signed into legislation by President Bill Clinton in September 1999. You can read more about the president's salary in "How much does the U.S. president get paid?") But she didn't always have a budget to work with: Until the 20th century, the president and first lady paid for entertaining costs themselves [source: Watson]. If the first lady needed funds for an event or required the assistance of a secretary, she had to suffice with small sums rationed from the federal budget and temporary aides sent from other departments around Washington. Some first ladies even asked their family members and the wives of other White House officials to lend a hand during the "social season" that lasted from November to April [source: National First Ladies Library]. But all that changed on Nov. 2, 1978, when President Jimmy Carter approved public law 95-570, which provided for the first lady's budget and staff [source: The American Presidency Project].

Robert P. Watson, professor of political science, categorizes the first lady's activities into three groups: social affairs, press relations and policy issues [source: Watson]. The size of a first lady's staff generally corresponds to the breadth of her activities. For instance, media darling Jackie Kennedy hired the first press secretary in U.S. history (she also had to appeal for the right to do so, given that the Kennedy administration preceded Carter's legislation). The first lady of the United States has the freedom to hire whomever she deems the best fit for a position -- and she can create positions based on her agenda. However, some positions remain a constant, no matter the first lady's activities. Professor Watson outlines these steadfast positions as chief of staff, press secretary, director of special projects and policy, director of scheduling and advance, and social secretary [source: Watson].

Her office is located in the East Wing of the White House, which was constructed to provide supplemental military offices during World War II. Since the Eisenhower administration, it has accommodated the first lady and her staff. In a maneuver that met much criticism, Hillary Clinton relocated her office to the West Wing in 1993 so that she'd be closer to her husband and his staff. But she wasn't alone: Sarah Polk, Edith Roosevelt and Florence Harding also kept their offices close by their husbands' [source: Watson].

While the size and roles of the first lady's staff may vary according to her agenda, they are also dictated by the era and the state of the union.

Lou Henry Hoover used her own money to renovate Lincoln's study and a sitting room with James Monroe-era furniture reproductions. She also paid for more secretaries to join her staff since only one was allocated for in the federal budget [source: The White House, National First Ladies Library].