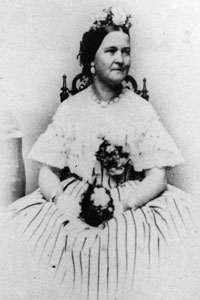 Mary Todd Lincoln was a controversial first lady, criticized for her excessive spending and for holding a seance in the White House.
Hulton Archives/Getty Images

Even if a low presidential approval rating stings a bit, the president has to bite his lip and go about his business. After all, he was elected to the position and he's beholden to the American people. But it's difficult to evaluate a first lady. As we've learned, she's not elected to the position -- she attains it by virtue of her marriage. This hasn't stopped the American public from offering its feedback, though.

One of the most poignant historical cases of first lady criticism involves Mary Todd Lincoln. The Lincoln administration coincided with the surge in typewriter manufacturing, unfortunate timing for Mrs. Lincoln, who received so much negative criticism from the public that a White House aide began vetting letters before they were turned over to her. Critiques of Mrs. Lincoln ran the gamut from her fashion sense and excessive spending to accusations of harboring pro-Confederacy sentiments.

Perhaps no first lady has been spared the public's ire. And the criticism she garners is usually more personal in nature. With the flexible parameters of her position comes a great deal of responsibility. She must balance her time among her three main duties, which you'll recall are social affairs, press relations and policy issues. The role is complicated even further if the first lady has children. Then, the public expects to see her prioritize her commitments to family along with her commitments to the nation. A first lady who devotes too much time to planning state dinners and hosting galas can be deemed a spendthrift; conversely, one who pours her energy into policy-making is judged for neglecting her traditional roles and encroaching on the president's territory. She can be viewed as idle or too active, impersonal or too candid.

After the first 100 days of a new administration, the public evaluates if the president is keeping the promises he made while campaigning. What changes has he affected? What goals has he accomplished? A first lady's performance can't be measured the same way because her goals for the first ladyship aren't as widely publicized -- if they're publicized at all. During her husband's campaign, the first lady generally espouses as her own causes whatever his platforms may be.

And much of the first lady's activity and appearance may be directly attributed to her husband. She is his humanizing half -- a stoic and withdrawn president's appearance can be bolstered by a lively and cordial wife. Grace Coolidge was a stylish counterpart to President Calvin Coolidge, for instance, and during President Bill Clinton's 1992 campaign for the presidency, he joked that with his driven, policy-minded lawyer wife Hillary, voters would get "two for the price of one" [source: Kornblut and MacGillis]. In the case of the Woodrow Wilson and Franklin Delano Roosevelt administrations, first ladies Edith and Eleanor were the lifeblood of their husbands, who were nearly incapacitated by a stroke and poliomyelitis (polio), respectively.

Perhaps it's no coincidence, then, that the first public opinion poll of the first lady was directed by Gallup in 1939, during Eleanor Roosevelt's first ladyship. While Roosevelt commanded high approval ratings in the early 20th century, Jackie Kennedy and Hillary Clinton became the most widely polled first ladies of the mid and latter halves. Pollsters even conducted an "unprecedented" approval rating poll of Hillary Clinton [source: Watson].

Until the United States elects a woman as president, the role of first lady will continue to be guided by the traditional feminine roles that gave birth to the position. How the next first lady chooses to exert her power and influence remains to be seen, and we can only speculate as to whether the era of political partnerships will continue or if a new era of first ladyship is coming.