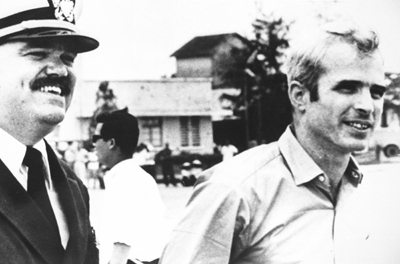 Lt. Cmdr. John McCain is led to a waiting transport plane after his release from the "Hanoi Hilton" in March 1973.
Getty Images

John Sidney McCain III was born in 1936 on an Air Force Base in the Canal Zone of Panama in Central America. Both his father and grandfather served in the U.S. Navy as admirals, and McCain began his own military career when he graduated from the U.S. Naval Academy in 1958, though near the bottom of his class [source: Pew Forum]. He became a fighter pilot for the Navy, and during his 23rd mission was shot down over Vietnam. His leg badly broken, he was captured by the North Vietnamese army, an event that "stopped the clock on his life" [source: John McCain].

Lt. Cmdr. McCain spent 1967 to 1973 as a prisoner of war in Vietnam. After he returned to the U.S., he wrote about his experience in the May 14, 1973, issue of U.S. News and World Report. His captors initially refused to treat his badly broken leg, but once they discovered McCain's father was a prominent admiral, his conditions improved. The Vietnamese hoped to gain military information from him: "They told a number of my friends when I was captured, 'We have the crown prince,'" [source: Free Republic].

Twenty-six years later, that same publication reported on a speech McCain gave in Washington, D.C., in March 1999. "As I was laying there in my prison cell in Hanoi having my legs broken by interrogators, one thought and one thought alone kept me going, that someday I would return home and do something about soft money," the candidate joked [source: U.S. News and World Report].

Despite poking fun at his detainment, McCain experienced torture, humiliation and psychological torment at the hands of the North Vietnamese. "I was at the point of suicide, because I saw that I was reaching the end of my rope," he wrote in the 1973 article [source: Free Republic].

As the war's end approached, McCain and his fellow prisoners were released. McCain remained in the Navy for another eight years, retiring in 1981. His last assignment was as liaison between the Navy and the Senate. By the time he retired, he had been awarded the Silver Star, Bronze Star, Legion of Merit, Purple Heart and the Distinguished Flying Cross [source: John McCain].

McCain met his current wife, Cindy Hensley McCain, at a military reception in Hawaii in 1979. McCain was married at the time to Carol McCain, his wife since 1965, who had suffered a crippling car accident during McCain's tenure as a POW. Once he returned from Vietnam, relations between the couple began to show signs of strain [source: Arizona Republic].

In April 1980, their divorce was finalized. In May 1980, McCain and Cindy Hensley married. The couple had four children, one of whom is adopted. McCain also had three other children from his first marriage: His two eldest sons are from his first wife's first marriage, and McCain adopted them. One daughter, Meghan, created a blog about her life on the presidential campaign trail with her father [source: McCainBlogette]. McCain was author of several books: "Character Is Destiny" (2005); "Hard Call" (2007); "Worth the Fighting For: A Memoir" (2002); "The Reminisces of Admiral John S. McCain, Jr., U.S. Navy (Retired)" (1999); "Why Courage Matters" (2004); "Faith of My Fathers" (1999 and "The Restless Wave" (2018).

He was raised an Episcopalian but since the 1990s attended North Phoenix Baptist Church. McCain said that he's Baptist, not Episcopalian, though he was unbaptized and not born again. He settled the matter by commenting, "The most important thing is I'm a Christian" [sources: Christian Science Monitor, CNN].

McCain said that he concluded during his time at the Hanoi Hilton that one of the most important things a man can do in his life "is to make some contribution to his country."