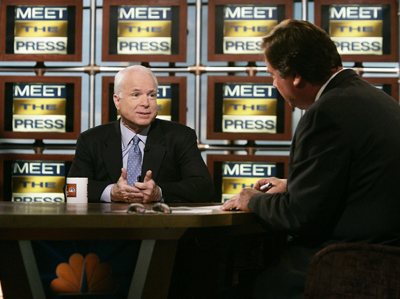 Sen. John McCain discusses his controversial opinions on stem cell research and immigration reform with Tim Russert on "Meet the Press" in 2005.
Alex Wong/Getty Images for Meet the Press

A joint scorecard of the 110th Congress (2007) by the conservative family values organizations the Family Research Council and Focus on the Family gave Sen. McCain a 42 percent grade for his voting on issues such as hate crimes, embryonic stem cell research and health care for unborn children. Although McCain only voted against the organizations' shared opinion once, he missed three of the seven votes they considered key [source: FRC Action].

The nonpartisan organization Disabled American Veterans gave McCain a score of 20 percent for his votes in 2007. McCain's voted in line with the DAV's concerns one out of five times during the second session of the 107th Congress.

The National Federation of Independent Businesses gave McCain 100 percent grades for his votes in the 110th and 109th Congresses on issues like tax write-offs for small businesses and giving the president line item veto power over minimum wage increases. The U.S. Chamber of Commerce gave McCain an 80 percent grade on his voting record. Conversely, the AFL-CIO labor union gave McCain a 16 percent rating for his lifetime votes in the Senate [source: AFL-CIO].

McCain received an F from the progressive National Education Association for his voting record in the 109th Congress (2006) on merit pay for teachers, Head Start program changes and education funding [source: NEA]. McCain received a grade of 50 percent for his voting in the 110th Congress on issues American Civil Liberties Union considers key, including the national identification card and grassroots exemption from lobbying reform. Although McCain only voted contrary to the ACLU once (restoring habeas corpus to foreign detainees), he missed five of the seven votes the ACLU surveyed.

The Concord Coalition (CC), a fiscally conservative organization, gave McCain's voting a raw score of 59 percent in the second session of the 106th Congress (2000) on issues like tax cuts, debt reduction and a temporary suspension of the gas tax. On a curve, he ranked in the 98th percentile for voting that reflected values held by the CC. For his record in the 107th Congress, he received a score of 95 percent. For his votes in the 104th Congress (1995) -- the first year the Concord Coalition began scoring -- he received a raw score of 48 percent (54th percentile). Issues that year included a constitutional amendment to require a balanced budget, reducing naval defense spending and welfare reform [source: Project Vote Smart].

The environmental group League of Conservation Voters gives McCain a score of 15 percent for his votes in the 104th Congress (1994) on issues including pesticide reduction, guaranteeing environmental protection, and renewable energy legislation. In 1998, on issues like increased funding for toxic waste cleanup, mining reform and family planning funding, McCain received a grade of 0 percent. During the 108th Congress, McCain's ratings went up to a grade of 56 percent for his votes on renewable energy, global warming and automotive fuel efficiency.

The liberal Americans for Democratic Action (ADA) gave McCain a score of 15 percent in 2006 for his votes on 20 issues, including extending the Bush tax cuts. In 1989, he received a score of 5 percent for a flag desecration amendment, "Star Wars" defense system funding and a minimum wage hike. In 1998, McCain received a score of 20 percent from the ADA for votes on Social Security personal retirement accounts, NATO expansion and immigration expansion.

The American Conservative Union gives McCain a lifetime score of 82.3 percent. In 2006, he scored a 65 percent grade, however, for his votes on earmark disclosure, pork spending and damages caps for medical malpractice. McCain received a score of 43 percent for his votes in 2007 from another conservative group, the John Birch Society, on issues like the minimum wage increase, estate tax repeal and embryonic stem cell research [source: Project Vote Smart].

Next, let's look at McCain's voting record. We'll begin with military and economic issues on the next page.