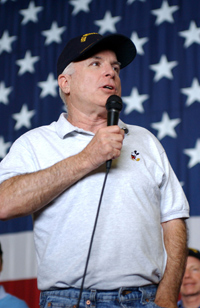 On the next page, we'll look at Sen. McCain's record on the environment and judiciary governance.