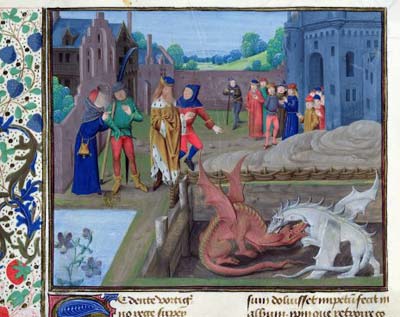 Arthur's advisor, the magician Merlin, is probably based on two different figures in Welsh history: a madman named Myrddin Wyllt and a prophet named Emrys Wledig, both of whom may have lived in the late sixth century. Geoffrey likely combined stories about both Merlins to come up with the character of Merlin as we recognize him today.

Two of Arthur's knights may have been real people as well. Sir Bedevere appears in the earliest Arthurian legends as one of Arthur's most trusted allies. He also appears in other writings, including the Welsh collection "Mabinogion." In this book, Bedivere is known as Bedwyr Bedrydant and is a member of the Royal House of Finddu, which rose to power in Wales in the early sixth century. Sir Kay was also one of Arthur's oldest companions. He appeared with Bedivere in the "Mabinogion" and may have actually been Cai Hir, a Welsh lord. Sir Kay also appears in the ancient Welsh poem "Pa Gur."

­As for Arthur himself, some suggest that he has Roman origins. Kemp Malone, a Medieval scholar, points to a military leader named Lucius Artorius Castus. Another potential Roman source is Aurelius Ambrosius, a leader who is said to have led the British to victory against the Saxons twice in the sixth or seventh centuries. Geoffrey described him as a "king of kings."

British historian Alan Wilson suggests that Arthur was actually the Welsh king Athrwys, who lived in the seventh century. Other historians have pointed to King Áedán mac Gabráin, who ruled Dal Riata (a kingdom located in modern-day Scotland and Ireland) in the sixth century, or King Áedán's son Artuir mac Áedáin, who did live in a fortress called Camelon. However, unlike Arthur, Artuir never fought the Saxons.

Finally, some historians suggest that the name "Arthur" wasn't a name at all, but a title, as the "Arth" character in Latin can also mean "bear." With this implication, Arthur could have been just about anyone. The current school of thought is that Arthur was based on a mix of either mythological or historical figures, or that he was solely a product of imagination. Regardless of whether Arthur actually existed, the legends will continue to inspire writers.­

For more information on King Arthur, knights, castles and all things royal, see the next page.

Why has a potentially fictional king become so popular? Probably because the Arthurian legends contain universal, identifiable themes of good versus evil, betrayal, magic, chivalry and the rise and fall of a utopian kingdom. Why has he continued to inspire movies, books and music? Probably because there's such a vast canon to choose from. For example, in the 2004 film "King Arthur," the king is depicted as a Roman soldier. In the popular 1983 novelization "The Mists of Avalon" by Marion Zimmer Bradley, the women in Arthur's life, including Guinevere and his sister Morgaine, take center stage.