Ridiculous History: How MLK Influenced the Direction of 'Star Trek'

"Star Trek" has one of the most passionate fan bases of any entertainment franchise in American history. Throughout its many decades of existence, fans have wished they could help dictate the direction of the show to meet their whims. Well apparently it takes an influential person to make that happen. Like Martin Luther King Jr. influential.

Nichelle Nichols, an African-American woman, played communications officer Lieutenant Uhura on the TV show in the 1960s. Her role had immense cultural significance because it was the first role portraying a black woman as something other than a trite stereotype. Uhura, whose name was based on the Swahili word for freedom, uhuru, was an important character on the starship Enterprise. Show creator Gene Roddenberry was determined to create a multiracial cast, something rare at that time in American television.

However Nichols' portrayal of the lieutenant was almost short-lived. Her background was in theater as she had performed in a Broadway satire about Hugh Hefner and Playboy titled "Kicks & Co." that helped launch her career. After the first season of "Star Trek," she was approached with the opportunity to return to the stage and decided to take it. But fate had other plans.

Roddenberry was upset to see her go and asked her to take the weekend to mull over her decision. During that time, she went to an NAACP fundraiser in Beverly Hills when she was approached by the most unlikely Trekkie. Here's how she recalled the meeting in 2011 to NPR:

"And I turn, and before I could get up, I looked across the way and there was the face of Dr. Martin Luther King smiling at me and walking toward me. And he started laughing. By the time he reached me, he said, 'Yes, Ms. Nichols, I am your greatest fan. I am that Trekkie.'"

King informed her that "Star Trek" was the only show he allowed his kids to stay up and watch and that not only was he a fan, he was deeply moved by what Nichols represented. America was in one of its most divisive eras ever, and King found it to be of utmost importance that Nichols continue to set a positive example of an African-American woman in a position of leadership on TV.

Nichols detailed her feelings after the conversation for a Reddit AMA in 2015:

"Dr. Martin Luther King ... said something along the lines of  'If you leave, they can replace you with a blonde haired white girl, and it will be like you were never there. What you've accomplished, for all of us, will only be real if you stay.' That got me thinking about how it would look for fans of color around the country if they saw me leave. I saw that this was bigger than just me."

Nichols' continued presence on the show cemented Lieutenant Uhura as a cultural icon in science fiction and American pop culture. If not for King's insistence and Nichols' changing her mind, we may never have gotten one of the most important scenes in TV history.

In the show's third and final season, NBC aired the episode “Plato's Stepchildren" on Nov. 22, 1968, seven months after King was assassinated. The episode was groundbreaking as it featured the first interracial kiss (between William Shatner's Captain Kirk and Nichol's Lieutenant Uhura) ever seen on U.S. television.

The legendary moment continued to fulfill Dr. King's dreams for Nichols and her character. He knew back in the show's first season that Nichols had the ability to continue to break barriers and redefine beliefs about black women in America. Her kiss with Shatner was further validation of his hopes that she could show America that people can love one another despite any racial differences.

Now That's Interesting
For decades, the Uhura/Kirk kiss was attributed with being the first interracial kiss on TV. However, in 2015 the British Film Institute uncovered an obscure televised version of the play "You In Your Small Corner", which depicted a black man kissing a white woman and even sharing a post-coital scene. The play aired in 1962, years before the fateful "Star Trek" scene.

What's Going on With the Apple Car? 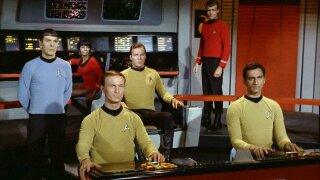 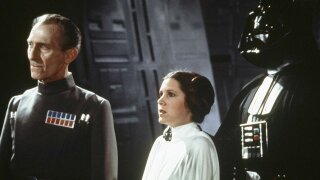 10 Surprising 'Rogue One' Connections to the 'Star Wars' Universe 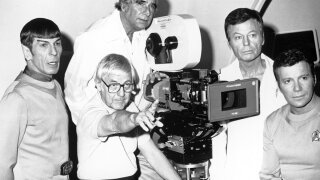 Does the 'Star Trek' theme really have lyrics?