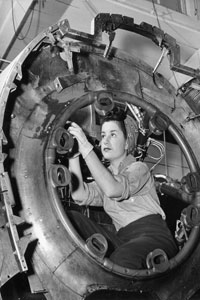 A woman works inside a cylinder at an arms manufacturing plant.
Harold M. Lambert/Lambert/Getty Images

First things first: What is a "riveter," anyway? A riveter is someone who operates a riveting gun, a necessary tool in the manufacturing industry. Many of the women who were inspired to join the work force by Rosie the Riveter actually did very little (if any) riveting, simply because their jobs didn't require it. In fact, the number of women who filled manufacturing roles never exceeded 10 percent of the overall women's working class, which numbered some 19 million [source: PBS].

The Rosie phenomenon came about following the beginning of United States involvement in World War II in 1941. A song titled "Rosie the Riveter," written by John Jacob Loeb and Redd Evans, was released in the early months of 1943. The lyrics described exactly the type of role the government was hoping women would fill during wartime: "She's a part of the assembly line, she's making history, working for victory, Rosie the Riveter."

On May 29, 1943, Rockwell's  depiction of Rosie appeared on the cover of the Saturday Evening Post. At the time, Rockwell had a reputation as the most popular illustrator in the country, so his cover reached a massive audience, bringing Rosie's unique and groundbreaking image to the forefront of attention [source: Library of Congress]. Rockwell sought 19-year-old Mary Doyle to serve as a model for Rosie, although he made some drastic changes to her natural appearance by adding a muscular physique [source: Rosie the Riveter].

Since the image's initial publication, critics have also noted a strong similarity between Rosie and the prophet Isaiah as he is depicted in Michelangelo's painting on the ceiling of the Sistine Chapel [source: Library of Congress].

Like Rosie, this woman is a true riveter. She drives rivets into an aircraft while her co-worker sits in the cockpit.
Harold M. Lambert/Lambert/Getty Images

But while Rockwell's version of Rosie may have been the most popular of its era, another version of Rosie -- the jaunty girl flexing her bicep and sporting a polka-dotted scarf on her head -- endures today. This Rosie was conceived of in 1942 by an artist named J. Howard Miller. Miller was contracted by an advertising agency to create the image for Westinghouse Electric and Manufacturing Company. The poster was intended for private use in Westinghouse factories from Feb. 15 to 28, 1932, and the public didn't really discover it until the 1980s. Now, the image is one of the top 10 most frequently requested images from the National Archives [source: Kimble and Olson].

Many people continue to interpret Rosie as a feminist icon, but revisionist historians stress that she was not. She was appropriated by different parties for a similar reason: to beckon women into the workplace. Unfortunately for many women who had grown accustomed to working and the financial independence that resulted from their jobs, Rosie's purpose was extinguished at the end of the war. Although employers had grown to accept women in the workplace, the return of the soldiers to the home front forced them to admit that their recently adopted female staff had been only temporary -- for the most part.

­Those women who continued to work outside their homes were pressured to take more socially accepted and lower-paying jobs, like secretarial positions. Although these gender disparities took hold once again, it was too late to close the floodgates. It wasn't long before the daughters of these women began to chip away at archaic ideas, making way for the women of today to seek higher education and excel in professional roles [source: National Park Service]. While the need for Rosie propaganda may no longer be necessary, her we-can-do-it attitude has left an imprint in history.