by HowStuffWorks.com Contributors
Prev NEXT
5 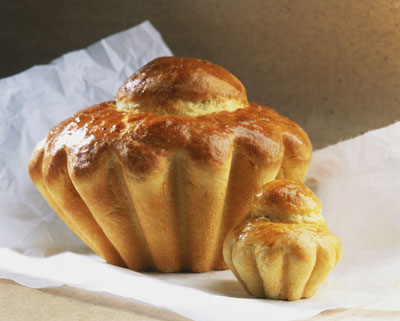 Brioche, the bread behind the brouhaha
Ian O'Leary/Getty Images

As famous as she is for hav­ing proclaimed, "Let them eat cake," when she heard that the­ peasants were starving from the dearth of bread, Marie Antoinette actually never said it. The young queen was known to be quite tender-hearted, in contrast to her less flattering attributes as a spendthrift and wild reveler. There are accounts of her administering aid to a peasant who'd been gored by a wild animal as well as taking in an orphaned boy. Besides accounts like these that attest to her kind and generous nature, there are straightforward facts that disprove her utterance of this scandalous remark.

The expression comes from Jean-Jacques Rousseau's "Confessions," a treatise penned in the late 18th century. There's a possibility that Rousseau turned the phrase himself; other historians think it may have been uttered by Maria Theresa. Maria Theresa was a noblewoman of Spanish descent who wed Louis XIV [source: Covington].

­And the expression isn't as callous as it may sound. From an economical standpoint, it was a perfectly logical thing to say.

What Rousseau or Maria Theresa actually said -- whatever the case may be -- is "qu'ils mangent de la brioche." This doesn’t mean "let them eat cake;" it means "let them eat an egg-based bread" [source: Goldberg]. The type of bread to which the speaker referred is a more luxe loaf than the typical flour-and-water bread of the Parisian pauper. A French law mandated that bakers sell their brioche at the same price as their inexpensive bread if this supply ran out. Later on, the law would be the downfall of the hungry lower classes when bakers responded by baking very short supplies of bread to save themselves from economic ruin.

Marie Antoinette had plenty of enemies in Paris, and it was easy to fabricate stories about the queen's spendthrift habits. Very likely, someone attributed this line to the wrong royal and the tale seemed true enough to stick.

Along with Marie Antoinette's image as a bonbon-eating, costumed and powdered confection of a lady comes her reputation as a lover of fine things. From loaves to carats, we'll explore another weighty scandal on the next page.

Let Them Admire My Hair

On June 1, 1961, French President Charles de Gaulle held a state dinner at the Palace of Versailles in honor of U.S. President Jack Kennedy. For the occasion, First Lady Jackie Kennedy wore a custom hairdo created for her by hairdresser Alexandre de Paris. Shaped like the French pastry bread, he dubbed it a "brioche." American and French women strived to emulate the style. Like Marie Antoinette, Jackie was a stylish woman and was often criticized for her extravagant taste in clothes and accessories [source: Baldrige].