by HowStuffWorks.com Contributors
Prev NEXT
2

The Brick Wall in the Bedroom 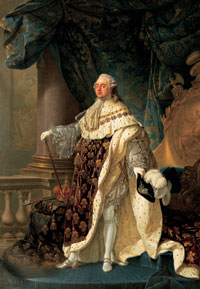 For seven years, Louis XVI and Marie Antoinette's marriage was unconsummated -- and it was all anyone could talk about. Well, that and the brewing revolution.

The couple wed in May 1770, and the ceremony and ensuing celebration had all the trappings of a lavish royal fête. At Versailles, custom permitted the king's courtiers to accompany the newlyweds to their bedroom, where they reposed on display. It did little to stoke the fires of passion.

Marie Antoinette was frustrated. She was willing and able to sexually receive her husband; as a matter of fact, she lived in a state of anxiety that he would never warm to her and that she'd be sent home to Austria as an utter failure. Her mother, Maria Theresa, reminded her of this danger at every possible juncture in their correspondence. She wrote to Marie Antoinette to "lavish more caresses" on Louis [source: Covington]. What's more, it was painfully clear to everyone that something was wrong with the couple. It wasn't just the young couple's physical gratification at stake: France was waiting for Marie Antoinette to produce an heir to the throne.

News of Louis' impotence spread from the court of Versailles to the streets of Paris, where pamphlets mocking his powerlessness were distributed. The propaganda planted the seed that if Louis couldn't perform in the bedroom, he certainly couldn't perform on the throne. Louis XV watched forlornly as his grandson failed to execute his mission; the reigning king had a rapacious sexual appetite and an insatiable mistress, Madame du Barry.

Louis was doughy, impressionable and more fascinated by locks, languages and hunting than he was by his lovely young wife. Marie Antoinette explained to a friend, "My tastes are not the same as the King's, who is only interested in hunting and his metal-working" [source: Fraser]. But different tastes or not, Maria Theresa wasn't going to take the news lying down. She sent her son Joseph to assess the couple's damage. He called them "two complete blunderers" and surmised that nothing else stood in their way of consummation.

Joseph may not have been entirely correct in his analysis. Louis had been diagnosed with a condition called phimosis in which the foreskin of the penis is tighter than normal and doesn't loosen upon arousal. This condition made sex very painful. There was an operation available to correct the condition, but Louis was reluctant to go under the knife. Some historians think he finally acquiesced and had the procedure while some say he never did; regardless, the couple finally consummated.

Marie Antoinette and Louis later wrote to Joseph, thanking him for his help. Who knows what suggestive advice he might have whispered in their ears during a walk around the grounds of Versailles?

A siren call even sweeter than her husband's voice roused Marie Antoinette from her malaise at court. Find out what it was on the next page.

How Much Power Does Queen Elizabeth Really Have?