Were there binoculars aboard the Titanic? 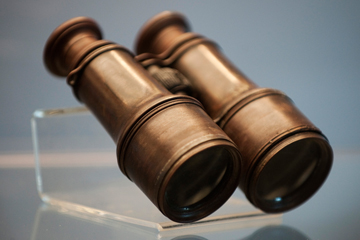 A pair of binoculars recovered from the Titanic's wreck site are on display during a news conference by Guernsey's Auction House.
Don Emmert/AFP/Getty Images

A balmy morning was warming into a sunny afternoon just as the RMS Titanic's maiden voyage began. The 882-foot (269-meter) vessel stretching the length of two-and-a-half football fields churned away from its port at Southampton, England, bound for New York City. After docking in France and Ireland, the steam-powered Titanic was loaded with cargo, coal and a manifest that had grown to 2,240 passengers and crew members.

Just before midnight on April 14, 1912, the Titanic struck a massive iceberg in the Atlantic Ocean and sank about 400 miles (644 kilometers) south of Newfoundland, Canada. More than 1,500 men, women and children died. Among the debris of the ship littering the ocean floor was a single piece of equipment that could very well have saved their lives: binoculars [source: History].

In the years that followed one of history's most enduring disasters, one question would dog the Titanic. Could the use of binoculars have prevented the Titanic disaster? If a crew member in the crow's nest would have used them, he could've spotted the iceberg in time to change course, saving the lives of everyone on board.

There were binoculars aboard the Titanic, but unfortunately, no one knew it. The binoculars were stashed in a locker in the crow's nest -- where they were most needed -- but the key to the locker wasn't on board. That's because a sailor named David Blair, who was reassigned to another ship at the last minute, forgot to leave the key behind when he left. The key was in Blair's pocket.

Lookout Fred Fleet, who survived the Titanic disaster, would later insist that if binoculars had been available, the iceberg would have been spotted in enough time for the ship to take evasive action. The use of binoculars would have given "enough time to get out of the way," Fleet reportedly said [source: Salkeld]. Others contend the binoculars wouldn't have helped because it was too dark as the ship approached the iceberg. Although the night sky was clear, there wasn't a moon to light the way. And there was no wind, creating a glassy sea that failed to give off telltale ripples around floating icebergs [source: Lipman].

In 2007, the crow's nest locker key and a postcard Blair wrote expressing his disappointment at not being on the Titanic's maiden voyage sold for $145,000 to a collector in China [sources: Belfast Telegraph, Salkeld].