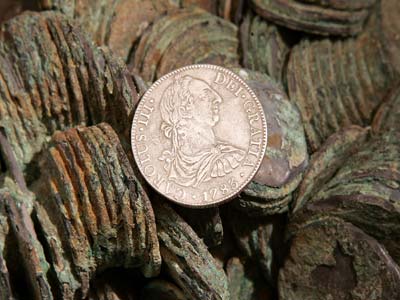 Fisherman Jerry Murphy and his crew snagged ­something unexpected while trawling the Gulf of Mexico one afternoon in 1993. At first glance, the fishing net appeared weighted down with rock and debris. Upon closer inspection, some of those rocks were actually piles of silver coins, which had fused together while underwater. Realizing that he may have stumbled onto a deep sea treasure trove, Murphy dialed up his lawyer to attain rights to the booty, then contacted maritime history experts to determine the source of the coins [source: McConnaughey]. A year later, researchers concluded that Murphy's discovery -- which occurred, ironically, in a boat named Mistake -- was the ruins of a warship called El Cazador, or "The Hunter," that disappeared at sea in 1784.

El Cazador set out from Veracruz, Mexico, loaded down with 19 tons (17 metric tons) of newly issued silver reales, or Spanish currency. King Carlos II of Spain ordered the money to be transported from the mint in Mexico to New Orleans, the capital of Spain's Louisiana colony. The king needed to pay his soldiers and government officials in charge of the city, but the paper money circul­ating in New Orleans had lost much of its value.

Not surprisingly, the city that lives by the motto "laissez les bon temps rouler" (let the good times roll) didn't always follow the letter of the law during colonial times. Situated in a relatively remote locale and settled by a fascinating hodgepodge of immigrants from France, Spain, Africa and the West Indies, New Orleans quickly developed its signature culture -- and a dash of Cajun corruption. A rash of counterfeiting and a shortage of hard currency devalued the cash in circulation, and left the Spanish government scrambling to compensate its employees.

On Jan. 11, 1784, El Cazador left Mexican shores, headed for the bayou. In June, the ship was declared missing, lost in murky depths for nearly 210 years. The more than 400,000 silver reales on board wasn't exactly pocket change for the Spanish government. That unlikely shipwreck gave King Carlos pause about whether the Louisiana Territory that Spain won from the French 20 years earlier was a worthwhile investment. 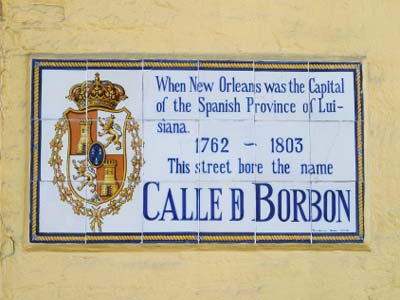 The Haitian Revolution and Louisiana Purchase

Napoleon dream­ed of creating a Western empire centered on international trade. The French Caribbean islands and Hispaniola (Haiti and the Dominican Republic) could farm sugar, coffee and tropical produce. With New Orleans as its trading stronghold in North America, Napoleon would wield economic power over the United States [source: Lachance]. However, a slave uprising led by Toussaint L'Ouverture in Saint-Domingue (the former name for Haiti) dashed those imperial plans.

The only successful slave revolt in history, French forces couldn't quell the Haitian rebellion. Napoleon dispatched 20,000 soldiers to restore peace and order, but a combination of yellow fever and unyielding solidarity among the former slaves defeated the military's efforts. By late 1802, France had lost an estimated 55,000 men [source: Lachance]. Since Saint Domingue was France's most lucrative colony in the West, Napoleon considered it a key asset for building his Caribbean empire [source: Rodriguez]. Cutting his losses, Napoleon abandoned the Western strategy and decided to refill France's dwindling treasury for impending war with Britain.

While Napoleon sorted out his imperial problems, another legendary leader also contemplated expanding his nation's horizons. President Thomas Jefferson viewed French control over the port at New Orleans as a hindrance to American settlement in the West. Jefferson didn't want to fight with France over the territory, instead seeking a diplomatic solution. He sent James Monroe as his envoy to the French government with an offer to buy New Orleans for no more than $3 million.

Instead of haggling over the port city, Napoleon surprised Jefferson by upping the ante. He put up the entire Louisiana Territory for sale -- no more, no less. The strict constructionist president was conflicted at first with the offer since the Constitution didn't include allowances for the federal government to accept land purchases. To get around that, he framed the deal as a treaty between the United States and France. The strategy worked, and Jefferson bought the enormous swath of land between the Mississippi River and the Rocky Mountains for $15 million on April 30, 1803.

Priced at barely four cents per acres, the 828,000 square miles (2.1 million square kilometers) signed over in Jefferson's Louisiana Purchase Treaty effectively doubled the size of the country. In less than three years, Louisiana passed from Spain to France to the United States. Though it took an unlikely shipwreck, war and a slave uprising to get there, Jefferson sealed the largest land deal in U.S. history with peaceful diplomacy and a signature.

The first U.S. dollar was modeled off Spanish reales, the type of coins recovered in the El Cazador wreckage. Although the U.S. mint was built in 1792, the government accepted reales as legal tender until 1857 [source: U.S. Mint].