Was Isaac Newton really hit in the head with an apple? 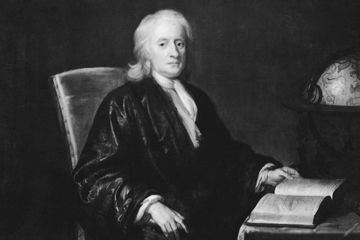 Was Newton hit on the head with an apple? Probably not, but it's a good way to teach children about gravity.
© Corbis

In 1666, the Great Plague of London was in full swing, killing scores of residents and causing others to flee to outlying areas. Among them was Isaac Newton, who left Cambridge for Woolsthorpe Manor, the pastoral home of his mother. In his new surroundings, Isaac continued to puzzle over the moon's orbit around Earth. As he lounged under an apple tree in the family garden, he was hit in the head with a falling apple and -- eureka --he discovered gravity.

Newton's apple is one of the most popular and enduring anecdotes in scientific history, told to school children and repeated in educational books. But did it actually happen? It's true that Newton left London, as did many people at the time, in an effort to escape the plague [source: The National Archives]. It's also true that he took refuge at his childhood home and spent time in its garden, where there was reportedly at least one apple tree. His discovery of gravity, however, was more likely the result of many moments of research and reflection rather than just one moment in which an apple bonked him on the head.

Although Newton never recorded the exact moment he discovered gravity, a few of his colleagues came close. William Stukeley, who recounted walking with Newton in the family garden and drinking tea under the shade of an apple tree, wrote one such account.

Stukeley, who also penned one of Newton's earliest biographies, recalled a discussion with Newton about the notion of gravity, one in which Newton pointed to a nearby apple on a branch as an example. Newton wondered why the apple should always fall to the ground, rather than fall sideways or upward when it released from the branch. The answer, Newton said, is that the earth attracts the apple using a yet-unnamed force. Thanks to Newton, this force would later become known as gravity [source: Stukeley].

Newton himself was fond of telling the apple anecdote, especially in his later years. However, historians suspect that by then he had honed the tale in such a way that it succinctly illustrated his discovery of gravity, boiling it down so that it was easy to digest [source: Connor].

A more accurate description of Newton's gravity discovery may come from something he said near the end of his life: "I do not know what I may appear to the world; but to myself I seem to have been only like a boy playing on the seashore, and diverting myself now and then in finding a smoother pebble or prettier shell than ordinary, while the great ocean of truth lay all undiscovered before me" [source: Biography].

Can a Country Buy Another Country?
Amerigo Vespucci, a Lurid Pamphlet and the Naming of America
Typhoid Mary Was the Original Super Spreader