Did Johnny Appleseed really plant apples all over America? 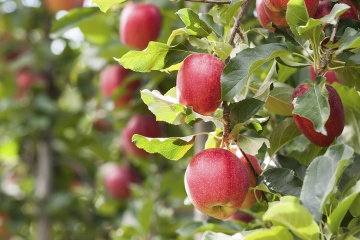 Did Johnny Appleseed live up to his name? Of course, he was an orchardist, but did he really travel around a large chuck of America?
Jules_Kitano/Thinkstock

It's been a long, hot day in the covered wagon and the heat, dust and exhaustion are making you rethink your enthusiasm for the new frontier. Suddenly, the wagon train comes to a halt. Stretched out before you is a wide river flanked by stands of apple trees stretching as far as the eye can see. Just as you've reached the breaking point, you discovered your new home -- courtesy of Johnny Appleseed.

Johnny Appleseed was the nickname earned by John Chapman, a Massachusetts-born nurseryman and orchardist, who planted more than 100,000 square miles of orchards across Pennsylvania, West Virginia, Ohio, Indiana and Illinois. There's no record of Appleseed planting trees west of Iowa, so the notion that he's responsible for apple trees all across America isn't rooted in reality. Nor is the idea that Appleseed planted scores of trees bearing ripe, delicious fruit [source: Biography].

Appleseed floated down the Ohio River with canoes lashed together carrying thousands of apple seeds. A frugal tree farmer, Appleseed collected seeds from discarded pulp at Pennsylvania cider mills and then headed west to plant them throughout the Northwest Territory. The seeds he collected weren't the varieties grown for eating; they were small and sour, designed for brewing cider. In addition, the apple seeds he planted would never grow into trees that produced the same type of apples as their parent seeds. A true reproduction must be done by growing a cutting of an adult tree or by grafting that cutting to another tree. Appleseed's trees would be destined to reproduce a bitter, possibly inedible fruit suitable only for making hard cider.

Although folklore contends that he planted apple seeds hither and yon out of the goodness of his heart, other accounts insist Appleseed was actually a savvy entrepreneur and one of the nation's first land developers. The apple orchards Appleseed planted were a big hit among pioneers, who used the fruits to produce hard cider, a weak alcoholic drink that also could be used to preserve foods. What's more, by traveling ahead of the pioneers and planting stands of apple trees, Appleseed was able to take advantage of the Northwest Ordinance, under which a person could plant "at least 50 apple or pear trees" as a condition of settling new land. Appleseed would arrive on unsettled land, plant apple trees, return for a few years to tend to the orchard and eventually sell the parcel of land to settlers at a profit -- hard cider ingredients and all [sources: Haley].

Some historians do believe, at least, that we have Appleseed's penchant for seeds instead of grafting to thank for the wide variety of hearty apples available in American grocery stores today [source: Geiling].