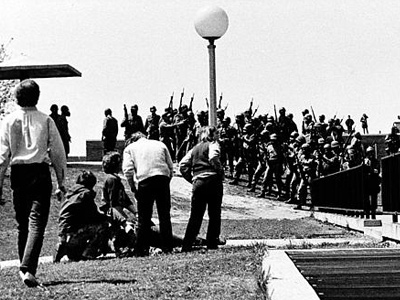 Protests Image Gallery A photo taken of a wounded person immediately after the Ohio National Guard shot into the crowd at Kent State on May 4, 1970. See more pictures of protests.
AP Photo/Douglas Moore

The 1960s and '70s were tumultuous times in the United States. The country was fighting an unpopular war in Vietnam that was instigating a wave of protests. In 1970, tensions came to a fever pitch when tragedy struck on one college campus. On May 4, members of the Ohio National Guard shot into a crowd of antiwar protestors at Kent State University, killing four students and wounding nine.

To understand the context of the tension, let's sum up the background on the war. Vietnam, which had recently fought for its independence from France in the 1940s and '50s, had split into the Communist North (Viet Cong) and non-Communist South, which sought a more democratic government. The United States had gradually increased its support for South Vietnam in order to prevent Communism from spreading in Asia. Richard Nixon won the 1968 presidential election based partly on his promise of Vietnamization -- transferring combat duties from U.S. soldiers to the South Vietnamese.

On April 30, 1970, President Nixon seemed to be betraying such promises about reducing U.S. involvement in the war when he announced that he sent troops into Cambodia, where the Viet Cong had its headquarters. Opponents of the war interpreted Nixon's announcement as a step backward, and it immediately prompted antiwar protests across the country, especially on college campuses.

Kent State University in Kent, Ohio, was one such campus where tense protests were held. The campus was a relatively unlikely setting for the dramatic events that unfolded over the span of four days leading up to the tragedy. Compared to nearby Ohio State University, the Kent State student body was generally less liberal and more blue-collar [source: Lytle]. However, it's thought that outside agitators helped escalate the violence and intensity of the protests.

As protests became more heated, the Ohio National Guard was summoned to Kent. These guardsmen became the center of the controversy for their decision to fire into the crowd. Many of these young men were no older than the student protesters and had joined the Guard in order to dodge the draft.

But the real story of what happened at Kent State begins a few days before the tragic shootings took place. It begins on Friday, May 1 -- the day after President Nixon made his announcement about sending troops into Cambodia. 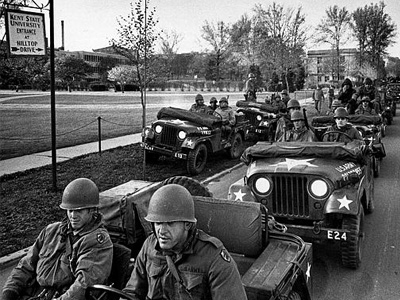 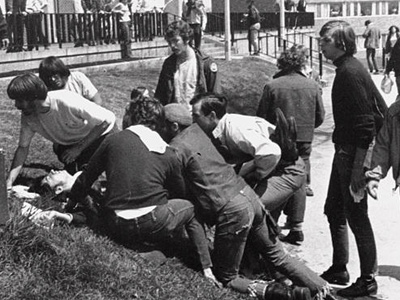 The National Guard killed four students and injured nine. This student lay wounded on the ground in the wake of the shootings.
AP Photo

Sunday night, protesters rioted and threw rocks at guardsmen; several arrests were made. The stage was set for a rally on Monday, May 4. The rally had been planned since Friday, but on Monday morning, university officials with the impression that the campus was under martial law issued 12,000 flyers to notify students that all rallies were banned [source: Lewis]. Student protesters defied the warnings and began gathering in the commons around 11 A.M.

By noon, the commons area was filled with nearly 3,000 people. Yet, only about 500 of these people were active protestors. Another 1,000 weren't actively participating -- they just came to show their support for the rally. Approximately 1,500 more lined the perimeter of the crowd, watching the rally and milling around. It wasn't exactly an antiwar protest; rather, evidence suggests that students were there to protest the guardsmen on campus.

The highest-ranking officer, Gen. Robert Canterbury, fruitlessly ordered an end to the rally, calling out to protestors with a bullhorn as he was driven around the commons in a jeep. As the crowd became increasingly rowdy and threw rocks at his jeep, Canterbury ordered his men to load their weapons and use tear gas. The guardsmen pushed the protesters past the commons and up and over the steep Blanket Hill into the Prentice Hall parking lot and a practice football field. Finding themselves cornered in the field by a fence, guardsmen retreated back up the hill. When they reached the top, 28 guardsmen (out of about 70) turned and began firing their guns. Although most fired into the air or ground, some shot directly into the crowd. In the span of 13 seconds, guardsmen fired between 61 and 67 shots [source: Lewis].

Four students were killed by gunfire: Allison Krause, Jeffrey Miller, Sandra Scheuer and William Schroeder. Scheuer and Schroeder weren't participating in the protest -- they were merely walking to class [source: Chermak]. Nine more people were wounded, one of whom, Dean Kahler, was paralyzed.

The tragedy could have led to even more bloodshed had it not been professor Glenn Frank, who was acting as a faculty marshal to keep peace during the protests. He successfully pleaded with the students for 20 minutes not to provoke the guardsmen any further.

Although we know these facts about what happened, we don't know why it happened. What prompted some of the guardsmen to fire into the crowd? Investigations and drawn-out legal battles attempted to answer this question. 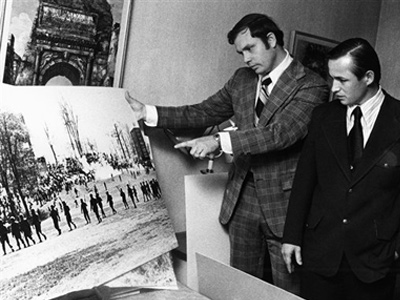