How did a Harvard commencement speech help save Europe after World War II?

Effects of the Marshall Plan 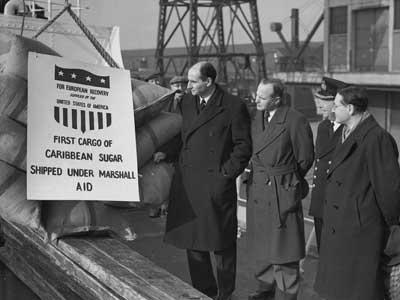 The­ Marshall Plan didn't happen inside a government-insulated vacuum. While officials hurriedly sketched out their plans for the foreign funding, a vast propaganda campaign also got underway. The participating countries publicly heralded the Marshall Plan as a saving grace with posters, leaflets and other media. One such booklet distributed by the Ministry of Economic Affairs in the Netherlands contained a cartoon proclaiming "Without the Marshall Plan, your bread would be bare and so would your children," above an image of towheaded children dressed in rags [source: Library of Congress].

The sheer size of the grant demanded the American public's approval as well, and that pro-Marshall Plan message extended into the United States. The May 1948 issue of Kiplinger was devoted to taking advantage of the Marshall Plan's economic ripple effect. Certainly, U.S. industries profited from the jolt of exporting to Western Europe. After all, the lifeline wasn't just a pile of cash; it included foodstuffs, agricultural equipment and machinery. This also helped establish the United States as a longstanding trade partner and the global economic powerhouse of the second half of the 20th century.

Not surprisingly, the Soviet Union sat out of the celebratory jig over the Marshall Plan, and historians have since debated whether the plan exacerbated the Cold War tension. The Soviet Union fought back against Marshall Plan propaganda through the Communist Information Bureau, or Cominform. They also introduced a grant package called the Molotov Plan for Eastern bloc nations [source: Schaff]. Ironically, if the Soviet Union had remained involved in the Marshall Plan, the United States would've likely withdrawn its offer for economic support because it wouldn't finance a Communist government [source: Crawley].

The effects of the program have continued in Europe. The postwar years were the first time that Western European countries had worked as closely for mutual gain. That international cooperation demanded by the Marshall Plan laid the groundwork for the formation of the European Union (EU). In an interesting twist of economic fate, today's gross domestic product in the EU and the value of its currency exceeds that of the United States.