Is Mesopotamia the Real Cradle of Civilization? 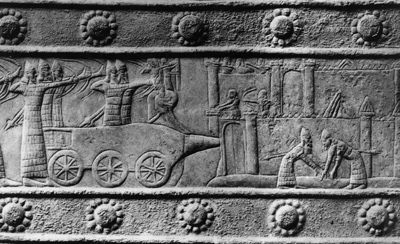 Civilization also spawned war, as is depicted in this 7th c. B.C. carving of an Assyrian invasion.
Hulton Archive/Getty Images

With a sede­ntary lifestyle based on agric­ulture, spiritual practices that once were spread out became more centralized and refined, leading to organized religion. People built huge temples, and a priestly ruling class took its place high up in the power structure. After all, these were the people who knew the intentions of gods like Enlil (wind) and Utu (sun).

Freedom from the necessity of foraging for food also allowed early agricultural societies to engage in other pursuits with less tangible rewards. Chief among these is science. The Babylonians are believed to be the first civilization to document time. They created minutes and seconds, and produced a calendar. This breakthrough provided the foundation for astronomy and math [Britannica].

But Mesopotamian civilization is also credited with negative innovations, like expansionism, empires, slavery and war. In 2300 B.C., the independent cities of Sumer were brought together under a single ruler. The capitol city, Ur, was invaded and leveled by another Mesopotamian group, the Elamites, just a few hundred years later. And epidemics and plagues were now viable, since, with so many people living together in a small area, they could be transmitted easily from person to person. Prior to cities and agriculture, epidemics couldn’t take hold among the hunter-gatherer bands that lived spread out and far apart.

For all the positive and negative contributions of Mesopotamian civilization, some archaeologists believe there are other groups in contention for the title of cradle of civilization.

Read about these ancient groups on the next page.