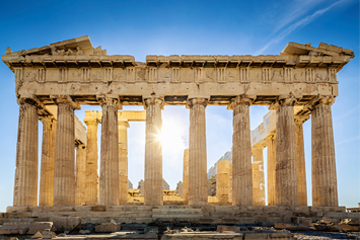 Sun blazes through the Parthenon, a well-known and well-built symbol of ancient Greece.
Mlenny Photography/Getty Images

A Greek scholar named Pythagoras, who lived in the 5th century B.C.E., has often been credited with discovering one of history's most enduring mathematical concepts: the golden ratio. It's also been called the golden mean, the golden section or the divine proportion, depending on who is using the term.

The golden ratio is usually rounded off to 1.618 (the number theoretically repeats into infinity, like pi). This number is represented by phi, the 21st letter of the Greek alphabet. Phi can only be found by dividing a line segment into two parts so that -- stay with me here -- the longer part (a), when divided by the shorter part (b), equals the whole length of the line when divided by the longer part. For example, a phi equation would look like this: a/b = (a+b)/a = 1.618. The number is interesting mathematically, but it also has a history -- disputed by some -- of being applied to architecture, art and more.

For centuries, it was widely believed the Parthenon, with its appearance of balanced, straight lines, was also built according to the golden ratio. Only it wasn't. A reconstruction project that began in the 1980s, designed to save the crumbling marble structure, revealed something else. Each of the thousands of pieces of the Parthenon was different, and there was nary a straight line among them. It actually fit together like a complex puzzle, with each part fitting only in its particular space.

Another ratio, however, does appear throughout most of the Parthenon, and it would also have met the Greek sensibilities for harmonic proportions. For example, the Parthenon is 30.8 meters wide and 69.51 meters long (101 and 228 feet, respectively). This equals a 4:9 ratio. This 4:9 ratio also is found in other parts of the building, including the width of the Parthenon's front columns, and in the height of the façade to its width.

Designing and constructing the Parthenon was the equivalent of orchestrating a symphony, using many different instruments in perfect harmony. Although the majestic Parthenon wasn't built on the golden ratio, the effect wasn't so different: It remains aesthetically pleasing [source: Nova].