The Terrible Fate of Helike 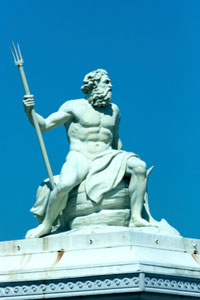 One of the many shared similarities between Atlantis and Helike: Both were centers for the worship of Poseidon, Greek god of the sea and of earthquakes.
iStockphoto/Thinkstock

Probably the most forthright clue that Plato fabricated Atlantis is that he is the only person to give an account of it. Prior to his tale, Atlantis hadn't been mentioned before and none of his contemporaries describe the legendary city either. But this is not to say that there aren't accounts of a location that very closely parallels Plato's description of Atlantis. There are well-documented descriptions of a real place named Helike, which suffered a fate much like that of Atlantis.

The coastal city of Helike, located on the Gulf of Corinth in Greece, was the seat of power of the 12-city Achaean League. The city was hundreds of years old by the time Plato rose to prominence; it was wealthy, it controlled shipping in the area and it had established its own colonies in other areas like Italy [source: Helike Project].

It was also a major center for the worship of Poseidon, the god whom Plato described as the patron of Atlantis. Like Plato's lost city, Helike featured a prominent and famous statue of the god.

For five days in December 373 B.C., witnesses in the area noticed that small animals like snakes, mice and insects were migrating en masse away from the coast and to the mountains that form the southern border of the Helike Delta. Indeed, earthquake researchers have noted an apparent ability among some animals to sense an impending quake and attempt to escape the area. This held true for Helike as well. In the middle of the night on the fifth day, a major earthquake struck the area, followed by an enormous tsunami from the Gulf of Corinth. In a matter of minutes, the city of Helike was overcome by the sea, just as Plato described Atlantis.

At dawn, a group of rescuers amassed and hurried to help the residents, but there was no one to save; the town was ruined by an earthquake and submerged beneath the sea. Ten ships from Sparta that had been moored just offshore had vanished. Only the treetops of Poseidon's tree grove still poked out from the water's surface [source: Gidwitz]. Beneath the water, the statue of Poseidon built by the cult that worshipped him still stood erect. Local fishermen reported catching their nets on it frequently.

And while the legend of the city and knowledge of its fate persisted, Helike did eventually become lost.