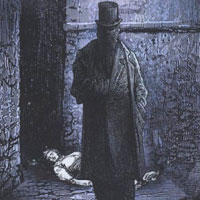 Image from "The Complete History of Jack the Ripper," by Philip Sugden
Courtesy Amazon.com

In 1888, a man dubbed Jack the Ripper murdered at least five women in London, all in the same general vicinity, all prostitutes. Each victim was strangled and then mutilated, usually disemboweled and sometimes missing organs when the police arrived. It was a gruesome string of crimes that came to be known as London's first serial killings. Many experts credit the investigation of Jack the Ripper with starting the criminal profiling field, as the surgeon who assisted in several victims' autopsies provided police not only with physical details of the crime but also with psychological characteristics that he believed to be associated with the manner of the killings. The surgeon, Dr. Thomas Bond, believed the killer would be unassuming in appearance and manner, and daring and calm in the face of unimaginable violence; he thought he would be middle-aged, leading a solitary life and wearing a long coat to cover up any blood from his crimes, since he killed in public spaces.

Jack the Ripper was never caught, and many have assumed this is because no one ever saw him except for his victims. This is a myth. More than a dozen witness statements from 1888 describe the killer's appearance, at least one in eerie detail, and many of the witness accounts back up Dr. Bond's profile. Most contemporary detectives believe that London police would have caught the killer if they'd had access to modern investigative techniques and that they probably interviewed the killer as a witness. The case was closed after four years.

A new documentary airing in England takes another look at the case using state-of-the-art profiling techniques to see if modern detectives can solve the crime. Some results have already been revealed.

First, those involved in creating the documentary think the police were looking for the wrong type of person. In 1888, the detectives were expecting Jack the Ripper to seem mentally ill, which may explain why they never caught him. Modern psychological profilers think Jack the Ripper most likely looked and acted perfectly sane. A geographical profiler, who uses locations and details of crimes to try to pinpoint where the killer lived, has determined that Jack the Ripper probably lived in the area of Flower and Dean Street in east London, within 1 square mile (2.6 square km) of each of the killings and within 100 yards (91 meters) of a known residence of each of his victims.

In 1888, London police actually canvassed this exact area asking residents if they had seen anything related to the crimes. But they had no sketch of the subject, and they came up with nothing. It could be that the sketch was the missing piece, and now, investigators have one. Read about the advancements of E-FIT on the next page.

Using all of the matching witness statements from the period (eye-witness accounts are notoriously contradictory -- the investigators ignored statements that contradicted the majority) and a piece of computer software called EFIT, or Electronic Facial Identification Technique, detectives have developed what they believe to be an accurate facial depiction of Jack the Ripper. Most of the witness accounts agreed on several traits, including:

One of the more interesting features of the EFIT software is that it takes into account the myriad psychological shifts that eye-witnesses make when they're reporting on a person's appearance, and it makes adjustments for them. To see the final image the EFIT software produced, check out BBC News: Jack the Ripper's face 'revealed'. You can compare the image to a selection of photos and drawings of suspects in the case located at Casebook: Jack the Ripper Suspects.

After the string of five gruesome deaths attributed to Jack the Ripper, the last of which was that of 24-year-old Mary Kelly, the serial killer apparently stopped killing. No other murders came up that matched his MO. Some believe Jack the Ripper Killed himself some time after the death of Mary Kelly. Others believe he was incarcerated for an unrelated crime.

To learn more about Jack the Ripper, criminal profiling and related topics, check out the links on the next page.