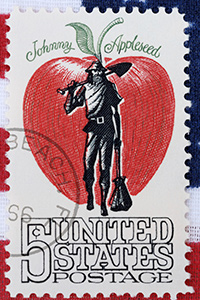 Born in 1774, Johnny Appleseed (aka John Chapman) is long gone, but his trees are still alive centuries later.
NoDerog/iStock/Thinkstock

There's an old saying among landscapers: "When is the best time to plant a tree? Ten years ago."

As anyone who's ever planted a seedling -- and hoped to live long enough to sit under its shade -- knows, trees take a long time to grow and mature. It's a lesson folk hero Johnny Appleseed knew well, as he spent 50 years traveling across the northeastern and midwestern United States planting apple tree seedlings ahead of pioneers who would settle the land.

Even though most fruit trees have a life span of only 15 to 45 years, there is a last-known survivor of Johnny Appleseed's reign. This ancient apple tree lives on a farm in Nova, Ohio, where Johnny Appleseed is believed to have planted an entire orchard of Rambo apple trees in 1830, and indeed still produces fruit [source: American Forests].

The tree's seeds and cuttings have been used to propagate hundreds of new "Johnny Appleseed" trees throughout the years, making it one of the nation's most valuable heritage plants. In fact, the Johnny Appleseed Educational Center and Museum in Urbana, Ohio, transplanted seedlings from this lone survivor in honor of Appleseed's contributions to agriculture [source: Urbana].

Nearly everyone familiar with American lore knows Appleseed was a famed folk hero, planting apple seedlings hither and yon as he traveled the country on foot. According to legend, Appleseed was often barefoot (by some accounts, he gave his shoes to someone in need) and wearing threadbare clothes. He wore a hat fashioned out of tin or, sometimes, used a metal cooking pot in place of a hat.

As legends go, it's an interesting story, but not exactly the truth. The Appleseed tale grew from the life of a real person named John Chapman, born on Sept. 26, 1774, in Massachusetts. Chapman picked up the apple business apprenticing for a neighbor farmer. And, unlike the legend that developed after Chapman's death in 1845, his efforts may have been a bit more mercenary than we've been led to believe.

Chapman planted orchards across Pennsylvania, Ohio and a number of frontier states as a way to establish ownership of the land. The carefully selected sites eventually became established nurseries, which Chapman sold off a few years later to newly arrived pioneers -- at an attractive profit. Gentler accounts, however, purport Chapman planted the fruit trees on unsettled land ahead of pioneers' arrivals so the trees would begin producing fruit by the time the pioneers needed it to survive. Other explanations of Chapman's motives report he planted apple trees not only to provide food for hardscrabble pioneers, but also to use the fruit to make hard cider [sources: Cornwell, American Forests].

It's entirely possible that, as he planted fruit trees across the frontier, Johnny Appleseed originated the concept of BYOB: bring your own booze.