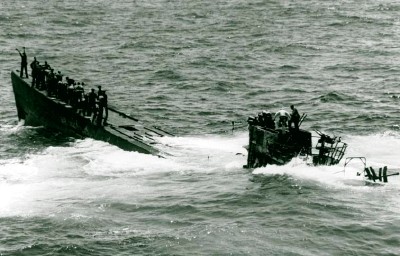 The Allied air raid over Normandy, France, is just one event summarized in the following chronological timeline of World War II events for the second half of April 1944.

April 13: A massive Allied bombing raid hits German targets in Hungary and Yugoslavia, as well as in Nazi Germany proper.

April 13: The Allies confront Sweden, which -- despite increasing pressure from the international community -- continues to supply the Nazis with ball bearings for their equipment and weapons.

Less than two months before the planned Allied invasion of France, American and British warplanes soften German defenses on the Normandy coast.

April 14: The Nazis deport the first trainload of Greek Jews from Athens. They are destined for the Auschwitz-Birkenau gas chambers.

At a Bombay port, nearly 1,000 people die, 20 ships are lost, and tens of thousands of tons of supplies are destroyed in a massive series of explosions that are triggered when a TNT-laden ship catches fire.

April 19: The U.S. House of Representatives approves a one-year extension of the Lend-Lease Act.

April 20: The Allies are finally able to convince "neutral" Turkey to stop supplying the Axis with chrome for weapons and transport production.

April 24: The U.S. Department of War concludes that only through a ground invasion of the Japanese homeland will the Allies succeed in winning the war in the Pacific Theater.

April 25: U.S. general George Patton creates a buzz when he implies that the Allies have plans for world domination.

The American capture of a German submarine and the fall of Crimean city of Sevastopol to the Soviet Union are among the notable news stories of 1944. Summaries of these and other major World War II events follow.

Americans capture German submarine U-505: Launched and commissioned in 1941, the German submarine U-505 sank eight ships and survived more damage than any other German submarine during World War II. On June 4, 1944, depth charges from the USS Chatelain forced U-505's crew to abandon ship, after which the sub was boarded and saved from sinking by U.S. sailors (pictured). Valuable documents and codebooks were taken from the submarine, which was then towed to the United States. This was the first enemy ship captured by the U.S. since 1815.

Nazi Germans patrol the bluff at Pas de Calais, France: A German tank patrols the beaches of Pas de Calais in the spring of 1944. The Germans had every reason to believe that the main impending Allied invasion would arrive in Pas de Calais -- and not farther west in Normandy, as the Allies actually intended. After all, Pas de Calais was close to England and had excellent landing beaches. The Allies added to Nazi Germany's misapprehension through a number of ruses, including the creation of a phantom army group that was stationed directly across the channel from Calais and was led by U.S. general George Patton.

Nazi politician Fritz Sauckel heads forced labor program in Nazi Germany: In March 1942, Hitler put Nazi politician Fritz Sauckel in charge of acquiring manpower for the war effort. Sauckel pursued his duties with extraordinary cruelty, forcing war prisoners and citizens of occupied Eastern territories into brutal slave labor. In a memo, Sauckel ordered, "All the men must be fed, sheltered and treated in such a way as to exploit them to the highest possible extent at the lowest conceivable degree of expenditure." Sauckel's policies brought some five million workers to Nazi Germany, only about 200,000 of them voluntarily. After the war, he was convicted of crimes against humanity and hanged.

The Nazis represent Terzin as a "model camp" to visitors: The 18th century fortress of Terezin (Theresienstadt in German), Czechoslovakia, became a Nazi "model camp." To deceive Red Cross inspectors and other international visitors, Theresienstadt -- which included a theater, café, and park -- was filled with Jewish scholars, musicians, and artists who were encouraged to give public performances and exhibits. On Adolf Hitler's orders, actor Kurt Gerron directed a propaganda film, The Fürhrer Gives the Jews a City, praising Theresienstadt. Of the 144,000 Jews sent there, about 33,000 died of starvation and epidemic diseases, and another 88,000 were deported to extermination camps.

City of Sevastopol falls to the Soviet Union: On April 8, 1944, the Soviet Union launched a major offensive (500,000 troops) against the German 17th Army, which had been isolated in the Crimea since November. Outnumbered two to one and with their backs to the Black Sea, the Germans attempted to make a stand at Sevastopol. However, after being shattered by massive artillery barrages and relentless infantry attacks, the city fell on May 9. Of the 230,000 Axis troops originally trapped on the peninsula, about 150,000 escaped by sea. The rest were killed or captured.

Follow the progression of World War II through late April and early May 1944 by continuing the next section of this article.