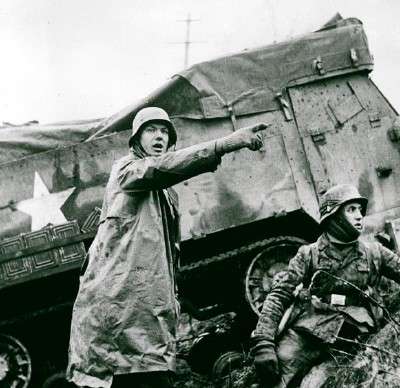 German soldiers advance past a knocked-out U.S. halftrack during the Battle of the Bulge in December 1944.

On July 20, 1944­, young German colo­nel Claus Schenk von Stauffenberg, a wounded veteran of the Tunisian campaign of World War II, attended Hitler's morning briefing at the Rastenberg headquarters in East Prussia while carrying a time­ bomb in a brie­fcase. He left the case under the heavy oak table at which Hitler was standing and found an excuse to leave. A few minutes later, the bomb exploded -- but not before another officer, finding it in his way, had kicked the case farther under the table. The blast killed four of those present, but Hitler was shielded by the heavy table. He emerged alive and vengeful. Stauffenberg was executed that night in Berlin. Several thousand suspects were arrested and about 200 were executed in the weeks that followed.

The assassination attempt coincided with a sudden crisis in the German war effort. Until late July, the front in Normandy had held, though at high cost. Again and again, the Germans struggled to repulse the British effort to capture the French city of Caen. The effort denuded German troops and tanks from other parts of the front, which allowed American commanders to plan a breakout through the German line.

After weeks of preparation and with overwhelming air support, U.S. general Omar Bradley launched Operation Cobra on July 25. For the first time, Western forces were able to develop real mobility. The line was broken open, and Bradley -- supported by notoriously belligerent general George Patton -- drove the German army back toward Paris in a matter of weeks. On August 25, Paris was liberated, partly by the approaching armies and partly by the French Resistance, which staged a final revolt against German occupation.

A second landing in southern France began on August 15, and within two weeks the enemy was cleared from the rest of France, meaning the Allies stood on the frontiers of Nazi Germany. The Western Allies grew hopeful that Nazi Germany might be defeated before the onset of winter. But General Montgomery's airborne assault on the Dutch city of Arnhem in the middle of September (to make it possible to cross the Rhine River) was bloodily repulsed. German resistance stiffened in immediate defense of the home territory.

In the East, Soviet Union troops reached the German border on August 17. Finland sued for peace on September 2, and during the following month the Baltic States were occupied and reabsorbed into the Soviet Union bloc.

Farther south, the Red Army made rapid progress after the destruction of German Army Group Center. Romania was occupied in August and switched to the Allied side. Bulgaria was occupied next, and by the end of October parts of Slovakia were also in Soviet Union hands. The Red Army stood on the boundaries of Hungary and Yugoslavia.

The dramatic collapse of Axis resistance owed something to popular resistance both in the West and the East. In Yugoslavia, a large Communist army under the leadership of Joseph Tito played the major role in liberating Yugoslav territory. In Italy, partisans harried the retreating Germans and prepared for a new postwar order.

In some cases, resistance was clearly anti-Soviet Union. In the Ukraine, a guerrilla war -- fought by nationalists -- tied down thousands of Soviet Union soldiers and security forces during 1944 and 1945 and slowed the move westward.

In Poland, the Home Army hoped to liberate its country before Soviet Union forces had time to construct a Communist state. On August 1, as the Red Army stood on the far side of the Vistula River, Polish nationalist forces in Warsaw staged an uprising against the German occupiers. The result was a savage response from the embattled German forces, which destroyed much of what remained of the city. The Red Army stayed where it was, and would not capture Warsaw until the start of the renewed campaign in January 1945.

In the Pacific, the Allies made rapid progress. Following the capture of Saipan, American forces retook Guam and opened the whole of the western Pacific to Allied forces. The Japanese again sought a decisive big battle as a key to saving what was left of their new empire. However, the American decision to reoccupy the Philippines exposed Japan's air forces to severe attack.

When the Japanese main fleet was deployed to oppose the American landings on the Philippine island of Leyte, the force lacked adequate air cover. The encounter was the largest naval battle ever fought, involving 282 ships.

In late October, three separate Japanese task forces were deployed to try to defeat the invasion. The result was a decisive victory for the U.S. Navy, as Japan lost 26 front-line warships. The invasion force landed on Leyte and cleared the island by the end of the year. Defeat of Japan was now only a matter of time.

The same could be said of Hitler's Germany, which was now surrounded on all sides by heavily armed enemies and subject to constant aerial bombardment. Yet Hitler still hoped for victory.

From June, new "weapons of revenge" -- the V-1 flying bomb and the V-2 ballistic missile -- were launched against London. Hitler hoped that by holding or destroying ports in the West, combined with a renewed U-boat campaign with new types of submarines, Nazi Germany would deprive U.S. and British forces of replacements and supplies.

In December 1944, Hitler ordered the German army and air force to use its scarce reserves for a daring counteroffensive in the West against American forces. The goal was to divide the Western Allies, seize the port of Antwerp, and force them to rethink their strategy. His commanders preferred a more limited offensive, but on December 16 Hitler unleashed Operation Autumn Mist.

In poor weather, which shielded the panzer armies from air attack, the Germans made rapid progress and carved out a salient 50 miles deep in the Ardennes. The Allies regrouped and counterattacked in what became known as the Battle of the Bulge. American resistance at St. Vith and Bastogne, Belgium, held up the German advance, and heavy counterstrikes drove German forces back to the German frontier.

On January 8, Hitler pulled his battered army back. The loss of 600 tanks and 1,600 aircraft marked the defeat of the Ardennes offensive. Nazi Germany was now exposed to the grim finale of the European war that Hitler had launched six years before.

See the next page for a detailed timeline of World War II events, including mass murders at the Auschwitz-Birkenau camp in early July, 1944. 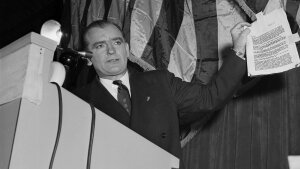 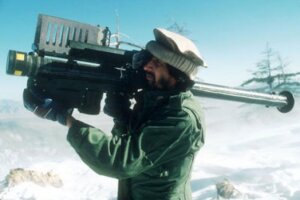