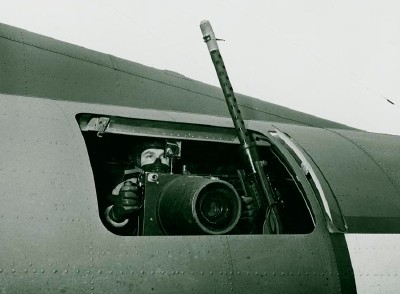 The World War II timeline below summarizes key events of late April and early May leading to D-Day, including a D-Day "practice run."

April 27: In the run-up to D-Day, British authorities ban all travel outside the country in an effort to put a stop to intelligence leaks about the invasion.

Some 120 Japanese planes are destroyed as the Allies return to the key Japanese base of Truk to inflict further damage.

April 30: The first prefabricated, $2,200 home goes on display in London, in advance of Churchill's plan to use hundreds of thousands of these structures to house those left homeless by the war.

May 1944: The Soviet Union prevails in the Battle of the Crimea. The area is emptied of German and Romanian forces, tens of thousands of whom have been killed.

This month, for the first time since 1940, no British civilians will die in Axis air raids.

Japanese shipping is severely curtailed following Allied mining of the waters off Thailand and Burma.

May 2: Schoolteacher and crossword puzzle creator Leonard Dawe attracts the attention of the Allies when one of his puzzles, published in the London Daily Telegraph, contains the word Utah. Subsequent puzzles will include the words Omaha and Overlord, leading Allied security to suspect Dawe is leaking intelligence about the D-Day invasion. He is not doing so.

May 3: Spain's Fascist government under General Francisco Franco agrees to curtail supply shipments to Nazi Germany in exchange for an increase in oil shipments from the Allies.

May 4: The United States suspends the rationing program for most types and cuts of meat.

The headlines below summarize D-Day preparations, the D-Day invasion, and other major events of World War II in 1944.

British military argues about area bombing: Along with Arthur "Bomber" Harris, RAF chief of the air staff Sir Charles Portal was a vigorous advocate of area bombing -- destroying civilian populations instead of military targets. But Portal's thinking changed, putting him increasingly at odds with Harris. Over Harris's strong objections, Portal sided with Eisenhower's commitment to the "Transportation Plan" of bombing French railroads instead of German cities in preparation for D-Day. Portal grew increasingly skeptical of area bombing's military effectiveness, but was unable to restrain Harris from bombing city after city late in the war.

U.S. General Dwight Eisenhower greets troops before D-Day: On June 5, 1944, General Dwight Eisenhower wrote a short note. "If any blame or fault attaches to the attempt," he wrote, "it is mine alone." Success was not guaranteed, and Eisenhower probably composed this message in advance of D-Day for fear that the proper words would not come to him if the invasion failed. "Ike" visited the men of the 101st Airborne as they prepared for their drop. He asked their names and where they were from. Not long after, he watched as the planes carried his airborne troops into the night.

General Omar Bradley's men storm Omaha, Utah beaches in Normandy, France: Due to his success in corps command during campaigns in North Africa and Sicily, General Omar Bradley was chosen by General Eisenhower as the First U.S. Army commander for the invasion of France. Eisenhower decided that Bradley's First Army, with its three corps, would land on the Omaha and Utah beaches in the first wave of the invasion of Normandy. Bradley watched the assaults from the USS Augusta. The landing at Utah met with relatively little opposition. Omaha, however, was heavily defended by German forces. After securing a beachhead on Omaha beach, Bradley's Operation Cobra, begun on July 25, 1944, tore a hole in German defenses.

Aerial reconnaissance assesses enemy defenses: Photography provided essential intelligence to all belligerents. The RAF rapidly developed strategic reconnaissance (with fast, high-altitude, unarmed aircraft) and tactical reconnaissance (with low-flying armed fighters). Their photographs were interpreted with stereoscopic techniques, producing a 3-D image from two overlapping prints. By 1942 Allied aircraft could produce 1:10,000 scale photographs from 30,000 feet. The USAAF initially employed specially equipped bombers (such as the one pictured) for long-range reconnaissance, but it soon switched to adapted fighters. Aerial photography proved invaluable for assessing enemy defenses (notably for Operation Overlord), interfering with the production and use of the V-weapons, and planning strategic bombing.

The five beaches of Normandy are given code names: Sword and Gold were code names for the beaches attacked by the British Second Army. Americans landed on Utah and Omaha. British troops landing at Sword met with very little resistance, sustaining 600 casualties. The Canadians attempting to land on Juno met with greater resistance, suffering about 50 percent casualties in the first hour. But once over the sea wall, they faced less opposition. The British who attacked Gold faced some resistance, which decreased as they moved inland. Americans landing at Utah faced the least resistance, suffering only 200 casualties on D-Day. Omaha proved the toughest, as the terrain was best suited for defense. By the time the Americans advanced off the beach, they had left about 3,000 casualties behind.

Breaking through the Nazi Atlantic Wall proves perilous: To defend against an Allied invasion from Britain, the Germans constructed the Atlantic Wall -- fortifications along the western coast of Europe. Obstructions were placed under water to tear holes in landing craft, and mines were seeded under the sand. Antitank barriers and walls of barbed wire were strategically placed along the beaches. The Omaha beach was raked by machine guns in pillboxes with overlapping fields of fire. Soldiers who made it to the barbed wire used Bangalore torpedoes -- 50-foot-long pipes (pictured) filled with 85 pounds of TNT -- to blow holes through the wire wall.

Allies encounter strong resistance after landing at Utah beach: Allies met with the stiffest resistance on Juno and Omaha beaches. U.S. colonel George Taylor of the First Infantry Division tried to motivate his shell-shocked and fatigued men to advance off Omaha. "Two kinds of people are staying on this beach," he said, "the dead and those who are going to die." Once beyond the obstructions, troops advanced up the slopes to destroy pillboxes, from which machine gun and artillery fire rained down.

In the next section, we'll provide a chronological timeline of World War II events for the first half of May 1944, as well as relevant headlines from the period.

Operation Overlord, the Allied invasion of mainland Europe and the establishment of the second front long advocated by Stalin to relieve pressure on the Russians in the East, was the greatest amphibious landing operation in history. The invasion at Normandy, France, represented the culmination and fruition of an Allied planning process that had lasted more than two years.

The deception measures taken to maintain Overlord's secrecy were almost as extensive as the main operation itself. The seaborne operation -- Operation Neptune -- was preceded by a large-scale airborne assault during the night of June 5-6 into the inland areas beyond and on the flanks of the landing beaches. This assault was carried out by 20,000 paratroopers and glider-borne infantry of the U.S. 82nd and 101st airborne divisions, and the British Sixth Airborne Division, flying in 1,087 transport aircraft and gliders.

With Allied airborne forces already in place (despite many paratroopers having landed far from their intended objectives during the night), the main seaborne landings began at 6:30 a.m. on . They were preceded by heavy air bombing and more than two hours of naval bombardment. Some 1,200 warships, 4,200 landing ships and landing craft, and 1,200 merchant ships were engaged off Normandy. Together they transported 185,000 men and 20,000 vehicles in the initial assault lift.

By last light on , from Varreville in the west to Ouistreham in the east, the U.S. First Army (under General Bradley) and British Second Army (General Dempsey), which together comprised General Montgomery's 21st Army Group, had gained a foothold at the five main landing beaches. These beaches were code-named "Utah" (U.S.), "Omaha" (U.S.), "Juno" (Canada), "Gold" (Britain), and "Sword" (Britain). At Omaha, however, this foothold proved somewhat tenuous for the first 24 hours.

On the Anglo-Canadian beaches, the "Funnies" of the British 79th Armored Division were used to particularly good effect. These were specialized armored vehicles specifically designed to breach the beach obstacles and defenses, and provide armored support on the beaches as soon as possible after landing. However, the U.S. commanders had declined to use these vehicles on their beaches.

Once safely ashore, the five U.S., British, and Canadian divisions -- together with various independent brigades, U.S. Rangers, British Commandos, Free French, and other specialist units -- quickly set about consolidating and exploiting the bridgeheads. Meanwhile, Hitler and the German high command believed that the main invasion was still to come at the Pas de Calais, with Normandy merely a diversion. The resultant uncertainty and delay in deploying the reserve panzer divisions held in readiness for this very task meant that by dawn on June 7 the only chance the Germans had possessed to repel the invasion was lost irretrievably. Hitler's "Atlantic Wall" had been breached.

About 4,500 Allied troops died on , 1,000 of whom were killed on "Bloody Omaha." The Allies were at last ashore in mainland Western Europe in strength, and the principal strategic aspiration of Roosevelt, Churchill, and Stalin had been realized. As a huge fleet of cargo- and troop-carrying vessels plied steadily from ports in England to the newly established beachheads and artificial "Mulberry" harbors, Allied strength in Normandy increased with each week that passed, and was soon unstoppable.