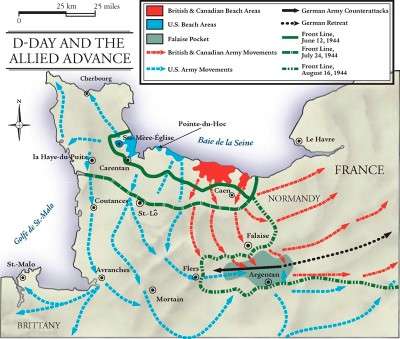 The Allies' preparations for D-Day continued throughout May 1944. The timeline below includes summaries of major World War II events during this crucial time.

May 6: Nazi Germany orders an additional 1,800 laborers from France to help staff the Mittelbau-Dora slave labor camp near Nordhausen, Germany. The workers are needed to step up production of the V-2 bombs that will terrorize Britain for much of the year.

May 8: Supreme Allied Commander Eisenhower confirms June 5 as the date for Operation Overlord, the invasion of France.

May 9: Luftwaffe installations on French soil are pounded by Allied aircraft in an attempt to render them harmless prior to D-Day.

On the Eastern Front, the Soviet Union recaptures the Ukrainian city of Sevastopol.

May 12: The Allies engage in heated battles with German troops across much of Italy, and manage to make steady gains.

The Allies warn secondary Axis powers Romania, Hungary, and Bulgaria that they will suffer if they continue to stand with Nazi Germany.

A Free French tribunal finds Vichy Admiral Edmond Darian guilty of collaborating with the Nazis and sentences him to life imprisonment.

May 13: The Allies finally break through the German Gustav Line, the western segment of the Winter Line, and begin their march northward through Italy.

American advances in Europe, the dissemination of news of the Normandy invasion, and more World War II events are illustrated in the following headlines from 1944.

Allies break out from the Normandy beaches: The Allied seaborne and airborne landings in Normandy by General Montgomery's 21st Army Group on June 6, 1944, were the culmination of years of operational and logistic joint planning and preparation. Although the U.S. Fifth Corps landing on Omaha Beach at first encountered severe difficulties, Anglo-Canadian-U.S. success on the other four beaches -- Utah, Gold, Juno, and Sword -- was generally remarkable. Nevertheless, several first-day objectives -- notably Caen -- were subsequently secured only after weeks of hard fighting in the densely wooded countryside of northern France. The delayed Allied breakout meant that many German troops escaped encirclement in the Falaise Pocket.

News of the invasion of France is released: At about 3:30 a.m. Eastern time in the U.S. on June 6, 1944, the following news was released: "Allied naval forces . . . began landing Allied armies this morning on the northern coast of France." This landing had been much anticipated in the Allied and Axis nations. Most Americans were anxious for news. President Roosevelt emphasized in a news conference that the invasion did not mean the fighting was almost over. "You don't just walk to Berlin," he said, "and the sooner this country realizes that, the better." The Japanese ambassador in Berlin notified Tokyo that German headquarters told him there would be no counterattack in Normandy because the German army still awaited (erroneously) the invasion of "the main body, which the Allies [have] not yet landed."

Hedgerows impede Allies' progress in Cherbourg, France: "Too many hedges," an Allied unit reported. "Must go forward slowly . . . take one hedgerow at a time and clean it up." Bocage is French for mixed woodland and pasture separated by thick, high hedgerows. Cherbourg Peninsula's terrain proved excellent for defense, undermining America's advantage in air support, armor, and artillery. The hedgerows did not stop a tank, but the machine's underbelly -- the weakest part of a tank's armor -- was exposed to enemy antitank and bazooka fire as it reached the top of a hedgerow. Units from the U.S. First Army needed 17 days to travel seven miles toward Saint-Lô.

British forces seize Bayeux, France: A British soldier fires a Bren gun over debris in Bayeux, France. Notice that censors have obscured his shoulder patch so his unit could not be identified. A member of the British 50th Division, he landed on Gold beach. The 50th came closer than any other Allied unit to its June 6 objective, as Bayeux was captured by the British the day after the landing. This soldier is using a Bren Gun -- a light machine gun popular in the British Army during World War II. It used magazine- instead of belt-fed ammunition like other machine guns. One of the gun's benefits was that it fired the same ammunition as the standard British rifle, the bolt-action Lee Enfield.

Americans break through the German line at Saint-Lô, France: In mid-June 1944, the Germans' defense stiffened in the hedgerows of Normandy. The British advance stalled at Caen, which was defended by much of Nazi Germany's armor. However, the Germans had few tanks in the American sector at Saint-L'99, allowing U.S. forces to breach the German line there in early August. U.S. general George Patton's newly formed Third Army threatened to encircle the German force still deployed across Normandy. Hitler called for a retreat from Normandy on August 16, leaving 50,000 dead and about 200,000 captured.

American troops made advances in operations in Italy and New Guinea in the latter part of May 1944. Read more about these World War II operations in the next section.