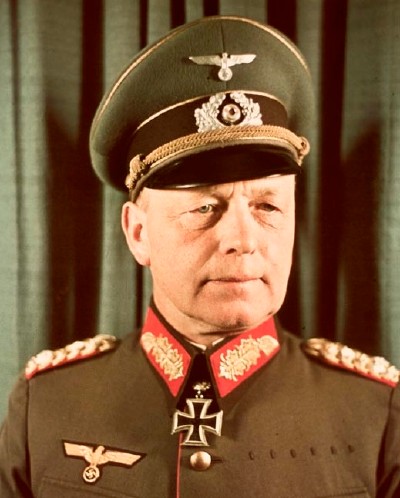 American and Soviet Union advances against Nazi Germany are among the notable World War II events of February 1944. Daily highlights are included in the following World War II timeline.

February 16-17: Japan's Imperial Navy is forced to withdraw from Truk, its main base in the central Pacific, when Truk is subjected to a highly destructive assault by American carrier aircraft.

February 17: The Red Army accepts the surrender of nearly 20,000 German Eighth Army troops, who are among those trapped earlier in the month. However, most of the Germans, some 55,000, go down fighting.

The Americans capture another forward base in the Marshall Islands with the occupation of Bikini Atoll. The atoll will become famous in later years as the site of the first hydrogen bomb test.

February 18: Seventy members of the French Resistance, sitting on death row in Amiens Prison in Nazi-occupied France, escape when Allied bombs damage the walls of their cells.

February 20: A ferry laden with tanks of heavy water en route to German atomic research facilities is sunk by a Norwegian saboteur in the very deep waters of Lake Tinnsjö.

February 20-25: During "Big Week," the American Air Force in Britain forces the Germans to send up their fighters to protect their aircraft factories against a massive assault by bombers. The escorting Mustang fighters decimate German fighter strength.

February 22: Greek partisans sabotage a track used by German troop trains. As a result, a train plunges into a ravine, leading to the deaths of some 400 German soldiers.

The headlines and images below provide more information about World War II's 1944 events, including Soviet advances and the American seizure of Eniwetok.

Nazi General Paul Ludwig Ewald von Kleist defies Hitler with retreat in Russia: After participating in the invasions of Poland in 1939, France in 1940, and Yugoslavia in 1941, General Paul Ludwig Ewald von Kleist led his tanks across the Russian border on June 22, 1941. By September, he had played critical roles in astounding military successes, including the capture of much of the Ukraine. He was promoted to field marshal in 1943. But even Kleist's considerable prowess faltered before inexorable Soviet Union offensives. Never one of Hitler's yes-men, Kleist in 1944 defied the Führer's orders by retreating across the Ukrainian territory he had earlier conquered. In March, Hitler permanently relieved him of command.

Soviet Union advances turn the tide against Nazi Germany: A grim picture of a slain soldier, mashed by military vehicles like roadkill, hints at the savagery of the fighting on the Eastern Front. By early 1944, the Soviet Union had turned the tide against the Germans. On January 4, Axis forces were routed westward across the prewar Polish border. A month later, Soviet Union troops had advanced 100 miles into Poland. In the Ukraine, the port city of Odessa fell to the Soviets on April 10, and the Germans lost Sevastopol on May 9.

Nazi Reichsmarschall Hermann Göring's excesses are fodder for cartoonists: By 1944 Nazi Reichsmarschall Hermann Göring, discredited by his Luftwaffe's failures, was showing the ill effects of his devotion to sensual pleasures. His bloated girth, outlandish costumes, and erratic behavior made him a popular subject for cartoonists. (Even Germans referred to him as "Der Dicke," meaning the "Fat One.") One caricature of a grossly fat Göring with a skull-like face was signed "Kukryniksy." The best known of Soviet cartoon signatures, Kukryniksy was actually a collective name used by collaborating artists Mikhail Kupriyanov, Porfiry Krylov, and Nikolai Sokolov.

U.S. fights on Bougainville island: American soldiers advance with a Sherman tank during the fighting on Bougainville in the Solomon Islands. After the initial landings on November 1, 1943, construction of an airstrip at Cape Torokina began immediately. Two other airfields were soon constructed to support the air campaign against Japanese-held Rabaul. U.S. Army troops under Major General Oscar Griswold relieved the Third Marine Division in December to expand the beachhead, protect the perimeter, and tend to the logistics of the newly established base. Army troops saw limited fighting until March 9, 1944, when the Japanese attacked in force. The GIs smashed the enemy assault, and the valuable airfields were never again threatened.

Americans seize Japan's Eniwetok atoll: Marines of the 22nd Regiment stay low during combat on Japanese-held Eniwetok. The U.S. seized the atoll on February 17-23, 1944, almost as an afterthought to the landings on Roi-Namur and Kwajalein. Those operations had gone so well that Admiral Chester Nimitz decided to capitalize on his good fortune and seize Eniwetok more than two months ahead of schedule. The atoll would serve as a base for future operations against Japanese-held Truk and the Caroline Islands. The 22nd Marines and the 106th Infantry quickly overcame the 3,500 Japanese defenders on Eniwetok and adjacent islands. Fewer than 350 Americans were killed in action.

For more information about World War II events leading up to D-Day, move to the the next section of this article.

Once the Japanese advance had been halted, Allied strategy was predicated on counteroffensives advancing eastward through the mid-Pacific and northward from Australia, leaving bypassed Japanese garrisons to wither on the vine. As a consequence, hundreds of thousands of Japanese troops held territory by 1944 that had neither offensive nor defensive value. Allied sea and air superiority meant that supplies could not reach them without great difficulty (often by submarines), and their redundant garrisons could not be switched to other fronts.

Even before this, Japanese forces in the Pacific faced severe shortages, largely because of rivalry within the Japanese system. For example, in the Dutch East Indies the army had trucks without tires, while on neighboring islands the navy had tires without trucks. Neither would swap. Japanese soldiers simply took food from local people. On New Britain, tens of thousands of civilian residents died, their gardens ransacked by starving soldiers.

At war's end, Allied forces gradually accepted the surrender of large garrisons, including 38,000 on Truk, 100,000 at Rabaul, and 40,000 in the Halmaheras. In the Solomons (where the first American counteroffensive had begun in mid-1942), more than 12,000 men remained, isolated and helpless. Japan's flawed strategy effectively neutered a half-million combatants.