By the time of the 1968 election campaign, there was much division in the country resulting from opposition to the Vietnamese War and from the racial strife sparked by the civil rights movement. President Johnson decided not to run for reelection, his popularity having declined sharply. The campaign was marked by the assassination of Senator Robert F. Kennedy of New York, who was seeking the Presidential nomination of the Democratic party, and by a violent confrontatlice at the Democratic convention in Chicago. 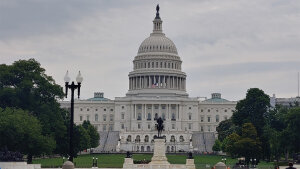