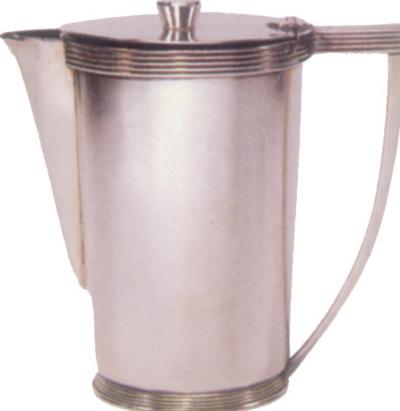 As the 1920s waned, high style came to the dining car as even tradition-minded railroads began using silverware with art deco or moderne lines.
John B. Corns

Several railroads vied for the title of America's "first" or "oldest" railroad; the New Haven, New York Central, Pennsylvania, and Delaware & Hudson railroads all had sincere claims, since all had corporate roots dating back to the mid-1820s. The Baltimore & Ohio made the most convincing claim, however, with the added advantage that it had operated continuously under its original charter since February of 1827. Many railroads constructed replicas of their first locomotives, and railroad history exhibitions appeared with increasing frequency, especially throughout the East.

The centenary celebrations highlighted a little-noticed fact. Whereas railroads had always tried to create a favorable public image of themselves, and had always advertised to attract traffic, it was during the 1920s that the railfan hobby emerged as a legitimate pastime. Surely there had been railfans before then, and to this day there are people interested in railroading who do not see themselves as true railroad enthusiasts. But in the 1920s, men-and a few women-began to organize clubs and excursion groups simply to enjoy railroading. The major model clubs and national railfan and history organizations would get their start in the 1930s, but this period saw the pioneers establish the foundations for what would eventually become a substantial hobby and an important advocate for the continuing preservation of railroading's heritage.

Meanwhile, trains continued to be an important part of American culture. The pull-toy and wind-up trains of the prewar era gave way to standard-gauge electric trains that more closely approximated the prototypes. Lionel, American Flyer, and other "tinplate" manufacturers introduced new types of electric trains with even more fidelity. A small, but slowly growing, number of enthusiasts attempted to make scale models of trains as a way to simulate real railroading.

In some parts of the country, trains became a Christmas tradition. In Baltimore, for example, firemen began setting up elaborate model-train displays in fire-houses each year, encouraging public visits. And just as railroads reached out to the public with advertising of all kinds, images of railroading graced all kinds of products ranging from S. S. Pierce's "Overland" cigars (with a handsome passenger train on the lid of the box) to Campbell's Soup and Coca-Cola.

North Americans also saw trains in the silent films that were packing moving-picture houses all over the country. The Perils of Pauline adventures were one example of long-running serial films in which trains were central to the plot. The drama and daring rescues possible with racing trains were irresistible to directors. Some films centered on the complex and visually fascinating workings of the railroad itself. Others used trains and tracks as backdrops for love stories, westerns, crime and mystery plots, and assorted cinematic heroics.

One of the classics of this period is an early talkie entitled Danger Lights. The plot involves a love triangle, but the real stars are the Milwaukee Road trains and the dramatic race to save the Division Superintendent's life. The dialogue reveals what Hollywood thought railroaders thought about themselves. At one point, the main character says: "We're railroad men . . . we gotta keep the schedule. That's our religion-that's our life."