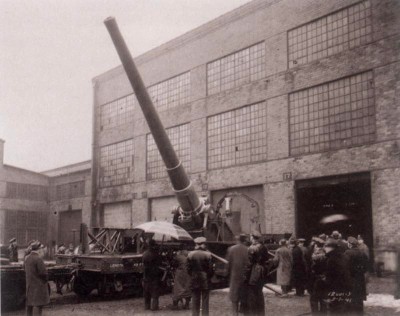 Converted for the duration of hostilities into materiel and ammunition makers, firms like Baldwin Locomotive Works, produced artillery and armament with much of the the same machinery used to build its steam locomotives.
Railroad Museum of Pennsylvania

The nation looked on uneasily as the clouds of war gathered over Europe and Asia. Countering the prevailing isolationist mood, President Roosevelt proposed increased military appropriations in 1938 and the creation of a two-ocean navy. The concept of national defense and the need to rearm gained impetus with the declaration of a limited war emergency on September 8, 1939. The export of scrap iron was halted a year later, and an unlimited national emergency was declared on May 27, 1941. Though not officially at war, the nation was definitely on a war footing.

Railroad traffic increased as the armed forces rebuilt. A freight car shortage occurred in late 1939 for the first time since 1921, and the railroads worked steadily to put long-dormant cars and locomotives back in service. Determined to avoid the chaos that resulted from government seizure during World War I, an Office of Defense Transportation was created to exercise general control over the railroads and ensure that national transportation priorities were met.