Ridiculous History: The Curse of the Colonel

by Bryan Young Mar 21, 2016
Just in the (very slim) chance you couldn't tell which one was which, that's Randy Bass on the left and the Colonel on the right. That's some resemblance, huh? Bettmann/Corbis/Denver Post/Getty

The Hanshin Tigers had a great season in 1985 and went on to win the Japan Championship Series, the equivalent of Major League Baseball's World Series. Following the win, the team's fans were ecstatic and celebrated far too hard. Drunken revelers took to the Ebisubashi Bridge in Osaka, Japan. As each player's name was called out, a fan who bore some resemblance to the player would jump headlong into the Dotonbori River.

This worked well until the name of first baseman Randy Bass was shouted out.

Randy Bass was an American. He'd spent six seasons in Major League Baseball with five different teams before his contract expired, and he wound up playing professionally in Japan. The change suited him. He became one of the most powerful hitters in the history of Japanese baseball. With him on the team, the Tigers shot through the championship.

Since he was a Westerner, the assembled crowd didn't have anyone who resembled him to jump into the river. Which is when they decided to abduct a statue of fast-food mascot Colonel Sanders from a nearby Kentucky Fried Chicken. With this stolen statue, they carried on their celebration, tossing the Colonel into the Dotonbori River.

The Colonel sank quickly, along with the rest of the championships the Hanshin Tigers ever hoped to win. Thirty years have gone by, and Tiger fans have been convinced that the Colonel had cursed them. Fans had some hope when, in 2009, much of the statue was found and fished from the river. The statue was missing an arm and the Colonel's glasses, though, and fans worry that until the statue is made whole again, they won't win another series.

Superstitions are nothing new in sports. Boston Red Sox fans thought the team was famously cursed for 80 years for trading away Babe Ruth in what was called "the Curse of the Bambino." And, of course, Cubs' fans are familiar with the curse of the Billy Goat.

Athletes have their own superstitions outside the world of fans, too. Dick Harmon, sports columnist for the Deseret News, tells us by email about his experience with athletes in this way: "Athletes by their nature tend to be superstitious, especially when it comes to preparing for events. I've seen players wear the same socks underneath their actual game socks, listen to the same song or music, eat the same food, hit the bathroom at a the same time before going out on the court or field ... I don't think this is hatched out of fear, but of comfort; not of jinxing themselves but setting their minds straight."

Fans of the Hanshin Tigers are still looking for a way to set their minds straight after the Curse of the Colonel.

Today, Randy Bass has retired from baseball and is a politician instead. He currently serves as a Democratic state senator in Oklahoma, representing District 32.

Now That's Fascinating
Bass left Japan and baseball after his son was diagnosed with brain cancer. He left Japan with the permission of the Hanshin Tigers, but the team's management later claimed no such authorization was made, and they fired him. When Bass produced a tape proving the authorization was made and faced with the loss of another key player, Hanshin Tigers General Manager Shingo Furuya committed suicide.

Does Your Doctor Screen You for Depression? Why Not? 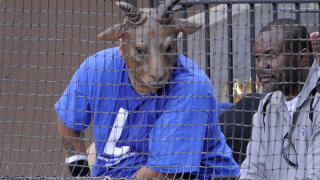 Stuff You Missed in History Class Podcast: Is there a real Macbeth curse?