On Feb. 17, 1923, a crowd of about 20 invited g­uests gathered in an antechamber deep within the Valley of the Kings, an elite Egyptian city of the dead. Archaeologists and Egyptian dignitaries were there to view the unsealing of King Tutankhamen's burial chamber. While the tomb's outer rooms had already revealed a treasure trove of Egyptian art and furnishings, excavators were hoping to find something more: the undisturbed mummy of King Tut.

As Howard Carter, the expedition's chief archaeologist, cleared away the stone filling between the two rooms, the assembled audience watched in silence. After 10 drawn-out minutes of work, Carter created a small opening -- just large enough to peer into the chamber and see light bounce off the wall of a solid gold shrine.

While the treasure of Egypt's more prominent kings and queens had long since been looted, Tutankhamen's tomb lay protected for millennia by the debris of an ancient construction project. Although thieves had entered the tomb at least twice, they had never penetrated past the second shrine of the burial chamber.

Over the next several years, Carter would excavate the most famous cache of Egyptian treasure ever found. The burial chamber's nesting shrines, solid gold coffin and famous placid-faced mask would soon eclipse the splendor of the antechamber and annex.

But the excavation of the young king's tomb would also become famous for more ghoulish reasons. By April 1923, only two months after the chamber's unsealing, the project's financier, George Herbert, Lord Carnarvon, died of complications from a mosquito bite. Then his dog died. Then other people connected to the dig began to die under suspicious circumstances.

So is there any truth behind the curse? Can you really get sick from an ancient tomb? In the next section, we'll find out if the curse had any supernatural or scientific basis. 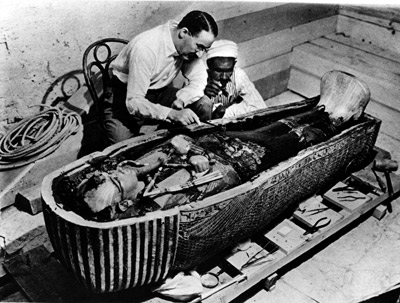 The European and American public, already stricken by Egyptomania, seized upon the idea of the curse. Newspapers sensationalized the deaths of people connected with the expedition or its principles. Richard Bethell, Howard Carter's assistant; Bethell's father, Lord Westbury; A.C. Mace, Carter's partner and Lady Elizabeth Carnarvon were all victims of the so-called "Revenge of the Pharaohs" [source: Ceram]. Judging by the list of victims, native Egyptians were not affected by the curse.

Carter, as famous for surviving the mummy's curse (at least until his death in 1939) as he is for discovering Tutankhamen's tomb, hated the sensationalism that surrounded the excavation. He was deeply disturbed by the public's willingness to be taken in by superstition. Carter even tried to argue that Pharaonic curses had no place in Egyptian death rituals. Tomb inscriptions sometimes contained protective formulas, messages meant to frighten off enemies from this world or beyond, but usually just wished the dead well.

Tutankhamen's golden coffin looks as good today as it did more than 3,000 years ago.
Gustavo Caballero/Getty Images

In 1933, a German Egyptologist, Professor Georg Steindorff, wrote a pamphlet on Pharaonic curses, attempting to debunk the myth -- while also riding on its coattails. He studied the lives and deaths of the "victims," determining that many had never been near the dig and had only tenuous connections to the principle archaeologists or financiers.

But like all good curses, that of Tutankhamen's tomb stuck around in the public's imagination. Eighty years after the tomb's discovery, the British Medical Journal published a scientific study of the mummy's curse. Mark R. Nelson of Monash University, Australia, examined the survival rates of 44 Westerners identified by Carter as being in Egypt during the examination of the tomb.

Nelson assumed that because the curse was a "physical entity," it had power over only those physically present during the opening of a chamber or coffin (thus removing Lord Carnarvon's dog from the roster of victims) [source: BMJ]. Nelson defined several specific dates of exposure: the Feb. 17, 1923, opening of the third door, the Feb. 3, 1926, opening of the sarcophagus, the Oct. 10, 1926, opening of the coffins and the Nov. 11, 1926, examination of the mummy. For people who were present at more than one opening or examination, Nelson accounted for their increased exposure.

Out of 44 identified Westerners, 25 were present during an opening or examination. These 25 lived an average of 20.8 years after exposure, while the unexposed lived 28.9 years. The mean age at death for the exposed was 70 years and 75 for the unexposed. Nelson determined that the results proved there was no curse [source: BMJ].

But what if there's a scientific explanation for the phenomena some mistook as a curse? Can a tomb make an already sick person sick enough to die? Find out on the next page. 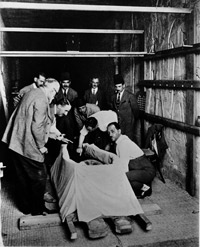