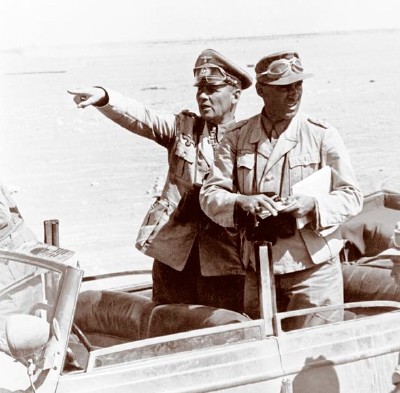 Nazi General Erwin Rommel -- "the Desert Fox" -- was widely respected both by his German troops and by his Allied opponents. See more pictures of WW II.

Several months into World War II, as Nazi Germany marched through France and eastern Europe, Adolf Hitler's thoughts turned increasingly to the prospect of the invasion of the Soviet Union. His fanatical anticommunism was certainly one reason. He was also attracted by the oil and raw-material resources of the Soviet area -- as well as the region's vast wheat lands, which had long been regarded in Nazi Germany as a potential area for colonization, or "living space."

­Strategic calculation also pushed Hitler toward war. On the one hand, defeat of the Soviet Union, he believed, would eliminate the last prospect that Britain had for creating an anti-German alliance, and thus would hasten British surrender. Defeat of the Soviet Union would also free Japan to move in the Pacific. Thus, there was not one cause but many for Hitler's directive to "crush Soviet Russia in a rapid campaign."

While Nazi Germany was fighting in the West, the Soviet Union took advantage of the situation. In June 1940, the three Baltic States were incorporated formally into the Soviet Union, just as eastern Poland had been. In addition, the Soviets forced Romania to hand over the territories of Bessarabia and northern Bukovina. In all of these areas, social and political opponents of the Soviet Union were rounded up and deported or murdered. In the Katyn Forest and two other sites, thousands of captured Polish officers were liquidated, their bodies buried in huge mass graves, each with a bullet hole in the back of the neck.

Joseph Stalin's ambitions continued to expand. The Soviets pressured Bulgaria to concede Soviet bases, and they urged Turkey to concede rights over the straits that separated the Black Sea from the Mediterranean. In October 1940, Italian dictator Benito Mussolini launched a war against Greece. On September 27, Germany, Italy, and Japan signed the Tripartite Pact, dividing the world into spheres in which they could each establish a "new order."

In November 1940, Soviet foreign minister Vyacheslav Molotov was invited to Berlin to discuss prospects for a further German-Soviet agreement. Molotov laid down terms for Soviet influence in Bulgaria and Turkey. Joachim von Ribbentrop, the German foreign minister, agreed to nothing and urged the Soviet Union to turn toward India as a sphere of expansion. Three weeks later, Adolf Hitler approved the operational plans for invasion of the Soviet Union, and on December 18 he signed War Directive 21 for Operation Barbarossa.

The plan called for launching the attack in May 1941, but transportation and supply problems forced postponement into June. Using bases in Hungary, Bulgaria, and Romania -- all states that had now come into the German orbit -- Adolf Hitler planned to rescue his Italian ally, whose troops were bogged down in the conflict with Greece. When Hitler demanded transit rights through Yugoslavia, anti-German elements launched a coup in Belgrade. German forces attacked Yugoslavia on April 6, 1941, and by April 30 the whole of the Balkan peninsula was in German hands.

Despite possessing capable combat aircraft, such as this Macchi C.200 fighter, the Italian air force was easily overtaken by the British on many occasions.

The Nazi Germans maintained utmost secrecy regarding their preparations, but intelligence sources alerted Moscow. Joseph Stalin, anxious that nothing should provoke war, refused to accept the warnings and made every effort to appease the Germans. Though some Soviet reserves were moved to the frontier in May and June, nothing could stop the massive assault by more than three million German, Romanian, Finnish, and other forces along the whole Soviet line in the West. In the early hours of June 22, 1941, they launched the largest invasion in world history.

On the next page is a detailed World War II timeline summarizing important events from early January 1941.

The United States was officially neutral in the first part of 1941. Learn more about the early years of the war and efforts to avoid it.