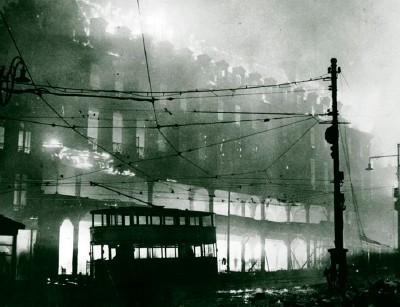 The new year of 1941 dawned with a bleak outlook for the Allies. Below is a timeline of important World War II events from the first days of January 1941.

January 1: A portion of Bremen, Germany, burns out of control when nearly 100 British Royal Air Force (RAF) planes hit the city with firebombs.

January 2: In an early indication of the dark days to come, all Jews in the Netherlands are required to register with the authorities.

The Luftwaffe arrives in Albania to aid Italy's counteroffensive against Greek forces.

January 6: In a congressional speech that features his principle of four freedoms -- of speech, of religion, from want, and from fear -- President Franklin Roosevelt promotes his lend-lease plan to "act as an arsenal" and provide material support to European allies.

January 8: In his annual budget request to Congress, President Roosevelt asks for an increase in defense spending to a total of $10.8 billion for 1942.

January 10: Britain loses control of shipping in the central Mediterranean when the Luftwaffe cripples the carrier Illustrious, which had been escorting supply convoys to Malta. Shipping routes to North Africa are now laid open for the Germans.

Below are more images and highlights from World War II and the Axis and Allied campaigns of 1941.

Sheffield major target in German blitz: Sheffield was a key British armaments center that produced everything from bayonets to armor, including crucial components of the Spitfire aircraft. Inevitably, the "Steel City" became a target of German bombing, though not at the sustained level expected. The Sheffield blitz occurred on the nights of December 12 and 15, 1940, when more than 660 people were killed and nearly 80,000 buildings damaged. The bombs fell on the city center rather than the steelworks, which remained largely untouched. Though many civilians took cover in Anderson shelters, some were killed while sheltering in basements, most tragically in the Marples Hotel.

Nazi propaganda film spews anti-Semitism: This poster promotes the 1940 German film Der ewige Jude, known in English as The Eternal Jew. A viciously inaccurate anti-Semitic pseudo-documentary, the film purports to recount the history of the Jewish people. It claims that Jews had a pernicious influence on art, science, politics, finance, sexual morality, and many other aspects of contemporary life. Frequent images of rats symbolize the infestation of Jews throughout society. The film's climax features a speech by Adolf Hitler promising the annihilation of European Jewry. Actor Peter Lorre, though pictured on the poster's lower right, does not appear in Der ewige Jude.

Follow more World War II events from January 1941 on the next page.

were limited in their development in the 1920s and 1930s by isolationist sentiment, disarmament, and the Great Depression. The Navy, the nation's first line of defense, suffered until President Franklin Roosevelt revitalized shipbuilding in response to unemployment, the rise of Nazism, and Japanese expansionism. The Navy's priority was battleships -- central to Plan Orange, which foresaw a decisive engagement with Japan -- but aircraft carriers and submarines were also constructed. By 1940 the Navy had a force of 161,000 men, while the Marines boasted 28,000.

The U.S. Army grew considerably after September 1939, but it was not well equipped or trained for war. The U.S. Army Air Corps was reorganized in June 1941 as the U.S. Army Air Forces (USAAF), but it remained subordinate to ground commanders. In December 1941, the USAAF had about 12,000 aircraft and 350,000 men. The war would make it independent and massive.

In 1940 Roosevelt initiated a $10 billion buildup of the military. A two-ocean navy was authorized, as was the first peacetime conscription in U.S. history. By June 1941, the Army was nearly 1.5 million strong. Yet Roosevelt still insisted that the U.S. would not join the fighting, remaining instead the "Arsenal of Democracy." The initial American response to Pearl Harbor would deplete the arsenal and necessitate great changes. Fortunately for the U.S., much of the framework for future growth was already in place.