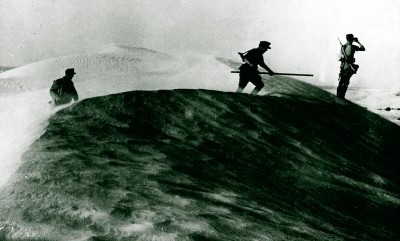 February of 1941 saw intense naval battles in the Atlantic between the British and the Nazi navies. These and other World War II events are detailed in the timeline below.

February 19: Nomura Kichisaburo, the Japanese ambassador to the U.S., asserts that any war between Japan and the United States would occur only at America's discretion.

February 20: El Agheila, Libya, is the site of the first desert battle between the British and German armies.

February 22: Some 400 Jews a week perish of starvation in the Warsaw Ghetto, a grim figure that will not improve with the enforcement of the new daily bread ration of three ounces per adult.

February 24: Adolf Hitler reports great success in the Battle of the Atlantic, claiming that in the past 48 hours alone, Nazi Germany has sunk British cargo weighing more than 200,000 tons.

Despite British pleas, the United States will not be sending any ships to protect the territory of Singapore against Japanese aggression in the East.

February 25: Advocates for the Netherlands's Jews are silenced by the SS, which puts an end to public demonstrations objecting to Jewish persecution.

February 26: The Nazi occupation government in northern Holland declares martial law in the wake of a series of attacks on Germans -- attacks that the Nazis claim were perpetrated by Jews.

March 1: Auschwitz commandant Rudolf Höss is informed that he will receive 130,000 prisoners for his new camp, 10,000 of whom will be forced into slave labor at the IG Farben company's synthetic rubber plant.

March 2: One day after Bulgaria's King Boris III is coerced into accepting Adolf Hitler's terms and joins the Axis, the German army marches into Bulgaria.

Germans score victories in Libya: German general Rommel's preemptive strike into Cyrenaica, the eastern coastal region of Libya, in March 1941 was a strategic masterstroke. Although parts of his Afrika Korps were still forming, he had judged correctly that the British and Commonwealth forces were exhausted after their successful campaign against the Italians, and that they believed no German offensive was possible before May. Accordingly, within a week of arriving in North Africa in February, German troops (pictured) were reconnoitering their opponents' positions. The Libyan towns of El Agheila and Mersa Brega fell on March 24 and April 1, respectively, and Tobruk, Libya, was besieged. Meanwhile, Italian morale was restored and all the British successes of 1940-41 reversed.

Legendary U-boat commander Otto Kretschmer: German U-boat commander Otto Kretschmer perfected "silent running," slipping his submarine into the midst of a convoy before attacking. His refusal to radio his base annoyed his superiors, as did his reluctance to broadcast Nazi propaganda. In 1940 Kretschmer and his U-99 famously needed just one torpedo for each target. He sank 47 Allied merchant ships (more than 270,000 tons). Captured by the British in March 1941, Kretschmer spent seven years as a POW. After the war, he served as a commanding officer in the newly formed German navy and as a chief of staff of a NATO command.

British commandos raid Norwegian islands: On March 4, 1941, a British commando raid on the Norwegian Lofoten Islands left behind burning fish-oil factories and smoldering oil dumps, as seen here from the destroyer HMS Legion. Landing in intense cold, the invaders met little resistance to their surprise attack, known as Operation Claymore. The commandos took some 200 German prisoners, recruited more than 300 Norwegian volunteers, captured encryption equipment and codebooks, and destroyed several enemy ships -- and were ready to leave the island by midday. The success of this first major Special Forces operation raised the morale of the commandos and the British public alike.

Nazi propaganda depicts Jews as animals: Adolf Hitler predicted genetic catastrophe if Jews were allowed to marry non-Jews. The title of the children's book seen here, Der Pudelmopsdackelpinscher, describes the genetically absurd poodle-pug-daschsund-pinscher mutt that adorns the cover. The title can be usefully translated as The Mongrel. As written by Ernst Hiemer (No. 2 man to Der Stürmer publisher Julius Streicher) and illustrated by Willi Hofman, this collection of 11 fable-like vignettes about lazy, parasitic hyenas, serpents, locusts, tapeworms, and others links each creature, via supposedly scientific epilogues, to the innately pernicious Jews, who must be destroyed.

Learn about World War II events from March 1941, including the German invasion of Yugoslavia, on the World War II timeline on the next page.