Why Did Napoleon Lose the Battle of Waterloo?

French Emperor Napoleon Bonaparte flees the pursuing Prussian troops as his carriage is captured after he is defeated at the Battle of Waterloo June 18, 1815. Original work by Robert Alexander Hillingford. Hulton Archive/Getty Images

At some point in your life, you've probably heard the expression "He met his Waterloo," meaning that the person in question had met a crushing defeat that ended his ambitions forever.

That's exactly what happened to Napoleon, near a village named Waterloo in Belgium June 18, 1815, when the 46-year-old French general-turned-emperor lost the climactic battle of his storied career at the hands of British and Prussian opponents. The battle ended Napoleon's attempt to make a comeback from exile, and ended the short-lived glories of France's First Empire.

Waterloo was a hard fall for a diminutive leader whose ego was so massive that at his coronation in 1804, he snatched a crown from the hands of the Pope and placed it on his own head. Napoleon was a master tactician who won more than 50 battles in his career, including a spectacular victory at Austerlitz (what's now Slavkov u Brna in the Czech Republic) in December 1805 that became a textbook example of daring tactics.

Facing a massive combined Russian-Austrian force that outnumbered his own army by 22,000 men, Napoleon deliberately weakened his right flank, luring the enemy into attacking him. It turned out to be a trap, as Napoleon counterattacked and cut the Russian-Austrian line in two. Twenty-six thousand enemy soldiers were killed, wounded or captured by the French. He was so successful that by 1812, he controlled most of the European continent with the exception of a handful of countries.

Napoleon's military dominance didn't last, in part because of his own hubris. He made what turned out to be a disastrous decision to invade Russia in 1812, but didn't prepare his troops for the harsh Russian winter, and ended up losing 300,000 of the 500,000 soldiers in his force. That was followed by a French defeat at the hands of British, Portuguese and Spanish forces in the Peninsular War in 1814. After British-led forces invaded France and seized Paris, Napoleon abdicated in April 1814, and was exiled to the Mediterranean island of Elba.

But less than a year later in February 1815, Napoleon escaped from Elba and returned to France. He issued a proclamation, calling for the French army to join in restoring him to power in the name of liberating France from foreign domination. "Victory shall march in double-quick time," he promised them. As the allies who opposed Napoleon gathered troops at France's borders, Napoleon struck first, leading his forces into Belgium with the plan of beating the opposing armies one at a time before they could coalesce against him.

Napoleon escapes exile from Elba and returned to France where he is greeted by French soldiers and citizens.
Library of Congress

Waterloo Was Doomed From the Start

"The first thing to bear in mind is that even had he been victorious at Waterloo, Napoleon would not have won the war," explains Tom Mockaitis. He's a professor of history at DePaul University, where he teaches courses in British, modern European and military history. Napoleon "faced a coalition consisting of Britain, Prussia, Russia, Austria and several smaller powers. Defeating Wellington would only have delayed the inevitable. With most of Europe ranged against him, defeat was only a matter of time."

Napoleon caught the Prussians by surprise, routing a force commanded by Gebhard Leberecht von Blücher, in the battle of Ligny June 16, 1815. But that would be Napoleon's final triumph. Napoleon sent a third of his troops to chase the retreating Prussians. Meanwhile, he led his remaining 72,000 men toward a confrontation with an allied force of 68,000 soldiers led by British General Arthur Wellesley, First Duke of Wellington, who was positioned near Waterloo, about a dozen miles from the Belgian city of Brussels.

At that point, Napoleon had a pretty good chance of winning. "The British and French were evenly matched," Mockaitis says.

But fate intervened. As French historian Thierry Lentz explains in this essay for the Fondation Napoleon, there was a heavy rainstorm the night before his planned attack on the British, and the ground was so soaked the next morning that the French had to wait until 11 a.m. to move their artillery into position. That deprived Napoleon of the element of surprise.

Was Napoleon Sick During the Battle?

To make matters worse, Napoleon hadn't slept due from some mysterious malady. Some bio-historians believe was a severe case of hemorrhoids, which may have made it excruciatingly painful for Napoleon to sit on horseback that day as he directed his forces. It also may have made it harder for him to think clearly at crucial moments.

According to Lentz's essay, Napoleon's plan was to pin down Wellington's forces at the strongest point in their line, the right flank, and then turn them back at the left flank. Ideally that would have forced Wellington to retreat from the battlefield to the northwest, before the Prussian army led by Blücher could arrive and join forces with Wellington.

But Napoleon didn't count on the tenacity of the force led by Wellington, who was an expert at defensive warfare. He took advantage of a ridge to shield his men from the French bombardment, and their line didn't break. Without the ability to outmaneuver the allies, Napoleon's elegant plan degenerated into a frontal assault. By the afternoon, Napoleon could see Blücher's troops approaching in the distance. The French calvary desperately attacked Wellington's line of soldiers, but they held.

"The battle was a tactical draw until late in the day when Blücher's Prussian's arrived tilting the balance decisively against the French," Mockaitis says.

When the Prussians finally arrived, it was the French line that collapsed. Napoleon's army of 72,000 suffered 26,000 killed or wounded, plus another 9,000 captured and 9,000 missing in action, according to David Eggenberger's book "An Encyclopedia of Battles." The emperor's comeback was over. He abdicated for the second and final time four days later.

But even in defeat, Napoleon was still feared. This time, the allies exiled him to St. Helena, a remote island in the mid-Atlantic, 1,200 miles (1,931 kilometers) from the coast of Africa. He lived there, under the watchful eye of Governor Sir Hudson Lowe, who refused to address him as emperor, though he did agree to build him a new house. Napoleon died there May 5, 1821.

Napoleon ultimately loses the Battle of Waterloo and wi exiled again, this time to St. Helena, an island in the mid-Atlantic ocean.
Hulton Archive/Getty Images

HowStuffWorks may earn a small commission from affiliate links in this article.

The Battle of Waterloo got its name because Wellington wrote his official dispatch about the battle from his headquarters there, even though the fighting actually took place a few miles to the south, as this 2015 Wall Street Journal article details. 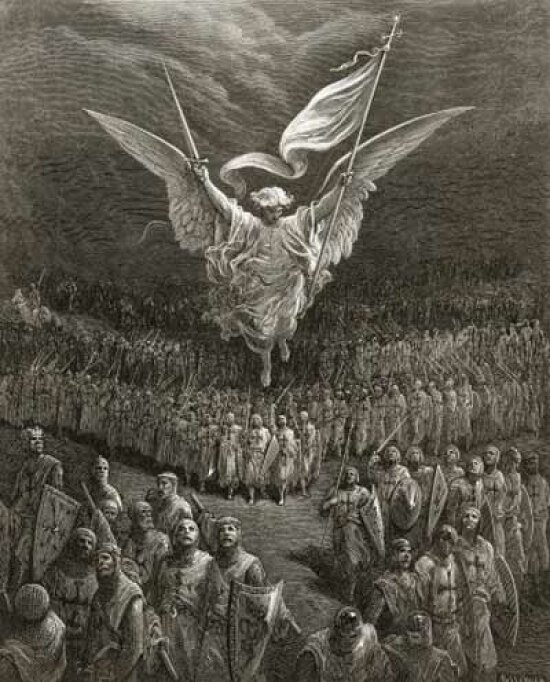 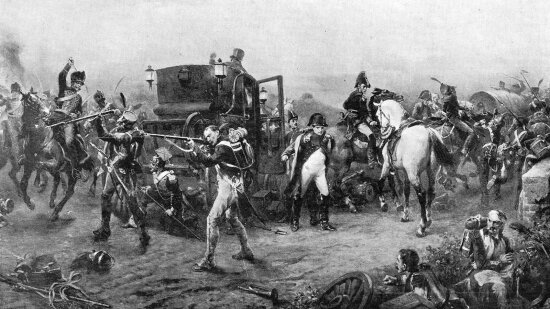 Why Did Napoleon Lose the Battle of Waterloo? 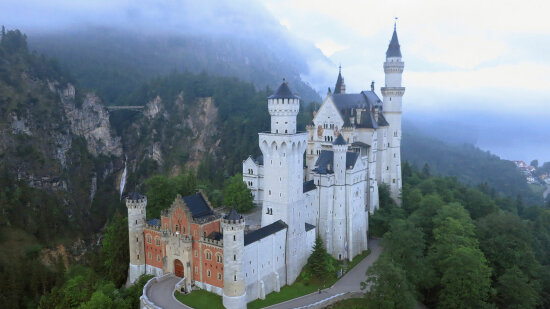 The Strange History of Neuschwanstein Castle is No Disney Fairy Tale