by HowStuffWorks.com Contributors
Prev NEXT
9 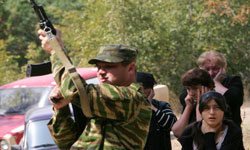 A South Ossetian soldier fires a salute to honor soldiers who were killed in the conflict between Russia and Georgia.
Viktor Drachev/AFP/Getty Images

They were both the unlikeliest and likeliest adversaries: Russia and the former Soviet republic of Georgia. Unlikely because Russia trumps Georgia in size and military might, yet likely becaus­e they were both after the breakaway regions of South Ossetia and Abkhazia. The European Union began its official investigation of the conflict on Dec. 2, after nearly three months of finger-pointing between Russia and Georgia. On Aug. 8, a skirmish broke out as Georgian troops and tanks fired on the region's capital, Tskhinvali. Russia retaliated by sending tanks into Georgia and flooding the nation's skies with fighter planes. While Georgia claims that it was acting defensively, Russia insists that it was protecting pro-Russian South Ossetians in the combat zone. The conflict was the result of years of tension between Russia and Georgia, as well as mounting strife from Kosovo's recent declaration of independence. Enduring the international community's criticism for its heavy-fisted invasion of Georgia, Russia seemed on the verge of a more serious retaliation against the country. After months of fighting, in which Russia ostensibly emerged as the victor, South Ossetia and Abkhazia broke ties with Georgia. For now, only Russia is acknowledging the independence of the two breakaway nations. What exactly is a breakaway nation, and how do you ensure safety and solid infrastructure if you start your own country?