by HowStuffWorks.com Contributors
Prev NEXT
7 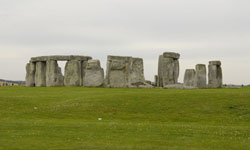 New revelations about Stonehenge suggest it's older than archaeologists originally thought and that it may have been used as a site of healing rather than a burial ground.
Barry King/WireImage

Of all th­e ancient world's mysteries, from the Egyptian pyramids to the stylized stone heads of Easter Island, Stonehenge has been one of the most baffling to archaeologists. Theories of all varieties have been purported to explain the purpose of these looming bluestone formations. For the first time in 45 years, scientists obtained clearance from the Druids to excavate the World Heritage site. Their findings? Stonehenge is older than we originally thought -- nearly 500 years older. According to the scientists' observations, it was likely erected in 3000 B.C. While scientists once thought that Stonehenge was a burial ground, some schools now suspect that it was used as a healing site. Evidence points to the bluestones being moved and repositioned as well as being pummeled by hammers and other tools that ancient people may have used to obtain a piece of the healing rock. Modern Druids corroborate this theory, having long insisted that Stonehenge is a harbinger of good luck, if not healing powers. Which of the world's ancient wonders will be demystified next? Learn about the processes of excavation and preservation in How Archaeology Works and What is a World Heritage site?