by HowStuffWorks.com Contributors
Prev NEXT
5

A Formal Apology for the Stolen Generation 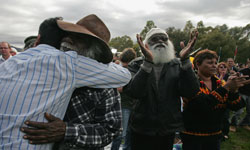 Between 1910 and 1970, nearly 100,000 Aboriginal children were taken from their ­parents as part of a campaign to phase out Australia's native race. These children became known as the Stolen Generation. The Australian government upheld the campaign because studies showed that Aborigines were at a higher risk for alcoholism, infant mortality, criminal behavior and drug addiction than non-native Australians. Separated from their families, Aboriginal children were meant to be assimilated into white society but faced emotional turmoil as a result of not being accepted on the basis of their race. What's more, they were cut from the comforts and identity of their own cultural heritage. No prime minister had offered a formal apology to the members of the Stolen Generation due to fear of sweeping lawsuits and demand for financial reparations. But on Feb. 13, Prime Minister Kevin Rudd delivered a formal apology nearly a century in the making. To date, only one member of the Stolen Generation has received financial reparations for his suffering. Learn more in How Aborigines Work and What was Australia's Stolen Generation?