by HowStuffWorks.com Contributors
Prev NEXT
3

An Undiscovered Tribe is Discovered -- Kind Of 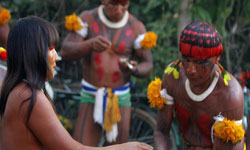 Brazilian Kuikoro Indians share food prior to their Kuarup ceremony in August 2005. Tribes like this one are threatened by encroaching loggers, ranchers and oil prospectors.
Antonio Scorza/AFP/Getty Images

It seemed entirely unthinkable in our linked-up, ­ultra-connected, Wi-Fi world: How could a tribe remain undiscovered in the Amazon in the 21st century? Photos of an Amazon tribe were published in major news outlets worldwide on May 29 and 30, and we stared agog at the tribal people brandishing bows and arrows at the photographers. Then, the real story came a few days later. These weren't exactly members of an undiscovered tribe; they were members of an uncontacted tribe. The difference in terminology is significant. Undiscovered means that no one has ever apprehended that group before. Uncontacted means that the government of the country in which they live knows they're there -- but no one is bothering them. First contact occurs when an isolated group is approached by an outside party, be it anthropologists or loggers. In the case of this Amazon tribe, first contact had already been made, and the group was being threatened by encroaching loggers, ranchers and oil prospectors. The Brazilian government released the images of this tribe -- originally taken between April 28 and May 2 -- to show the world firsthand the people who are threatened by deforestation. Lesson learned? Time will tell.